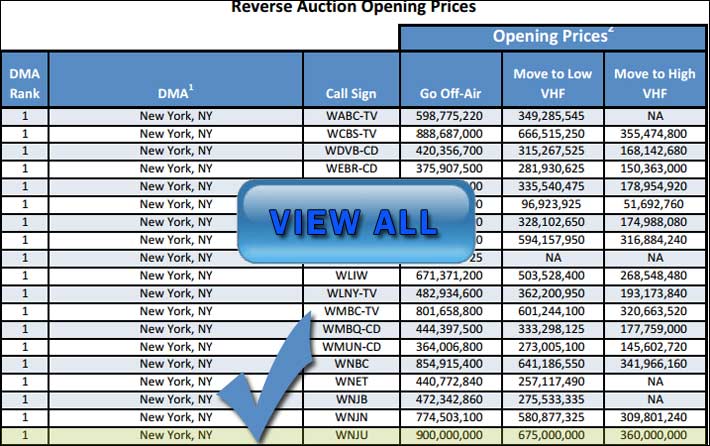 The FCC has adjusted repacking opening bid prices for TV stations in the reverse auction, with Telemundo’s WNJU New York having the highest bid price at $900 million, with WCBS coming in second at $889 million.

The changes do not impact the start date of the auction, which begins March 29, 2015.

WNJU’s considerable $81 million increase was due to the station moving from the Empire State Building to One World Trade Center, resulting in additional coverage.

Of the eight out of over 2,000 stations whose price change is more than 1%, six are increases.

Bid prices had been released by the FCC in October, but a couple of stations took issue with how their files were calculated and the FCC found additional discrepancies in its review, requiring the new pricing list issued Thursday.

The incentive auction is expected to provide a windfall of work for broadcast contractors, antenna manufacturers and related industry suppliers.

However, the ambitious 39-month deadline appears to be too aggressive, according to a study from Digital Tech Consulting that identified that up to 445 stations can complete the requested tasks in that time period.

Nonetheless there could be up top 1,150 stations that need to be repacked. An estimate of what a reasonable timeframe would be cannot be known until after the auction is completed.

A tower crew shortage capable of providing broadcast work has been identified by Digital Tech’s study, however, it didn’t address a primary industry concern – safety – which could be impacted as crews are stretched too thin and others startups enter the marketplace untrained and unqualified to perform the exacting disciplines required in broadcast installations and tall tower renovations.