Editor’s Note: The following article on the elusive number of towers in the U.S. and the total number of structures that companies state they own was published in Sept. of 2010, and while wireless technology has dramatically changed, tower count accuracy and a desire to embellish statistics hasn’t. And the article is still on target and worth the read. View Top 100 U.S. Tower Companies. 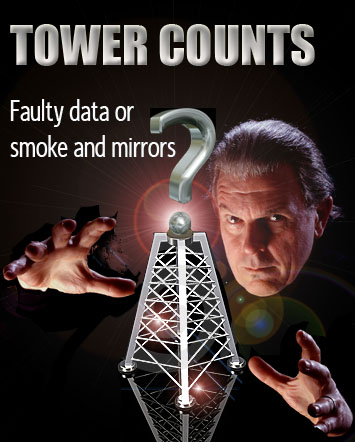 Reporters, analysts and consultants have a penchant for being able to spice their comments with newly farmed facts, especially in the wireless industry regarding the number of communications towers in America.

One noted researcher in an industry publication recently said that CTIA placed its most recent tower count at 242,130.

That number and most of the totals offered elsewhere appear to be incorrect, however, because they’re based upon faulty databases, incorrect information that becomes the gospel once published, and what appears to be the natural marketing path for some companies to inflate tower counts and their capability to be co-located.

Association tracking proves difficult
Tim House, director of marketing and sales for PCIA, said that his trade organization that is holding its conference next week in Hollywood, Fla. does not track the number of towers in the U.S.

“We have attempted to do so in the past and may in the future, but have found it to be a daunting task,” he said.

House said that he wanted to make sure that PCIA has an approach “that ensures accuracy.”

Dr. Robert Roche, who has headed up CTIA’s research department since 1993, said the industry’s largest association representing the wireless industry does not capture tower totals, but only cell site totals – the most current tally at the end of 2009 at 247,081. 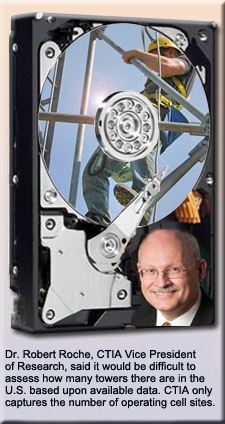 This figure includes repeaters and other cell-extending devices.

Roche acknowledged that their data gathering is a largely volunteer effort of carriers and not all of them respond to CTIA’s inquiries. In addition, CTIA counts each carrier’s site, so if four carriers were co-located on one tower, it would still be considered as four individual cell sites. Currently, the average tenancy of carriers on cell towers owned by the major consolidators is approximately two.

He agreed with House that there were no companies or representative data within the industry that could provide a reliable total of towers.

The newest cell site count is expected to be introduced at the CTIA Enterprise and Applications show next month in San Francisco.

The majority of communications structures in their program, unfortunately, are from the FCC, databases that beg daily for forgiveness for their inability to provide manageable data.

Any tower can be registered in the FCC’s ASR system if the owner wants to expend the effort, but those registrations are not required.

The FCC’s list is primarily those towers that are 200 feet or more above ground level or those within a certain slope level distance or height from a local airport.

Following a review of one major tower company’s database of thousands of towers, the average structure height was 121 feet.

It’s virtually impossible to be able to assess how many towers a company owns by sorting the owner’s name in the FCC database since the original registrant’s name oftentimes remains after towers change hands.

Faulty information acknowledged
“Their information is not updated and it’s oftentimes incorrect, but you learn to work around it,” said one programmer who helped develop a search program that relies upon extracting FCC data.

In a random sampling of search programs using the FCC’s information, examples of the FCC’s incorrect data often appeared showing companies that have sold their towers a number of years ago.

Although carriers and major tower owners have changed the administrative information, they often retain the original owner’s name in the database, complicating being able to get accurate tower counts. In addition, one tower company can have up to a dozen or more operating subsidiaries. 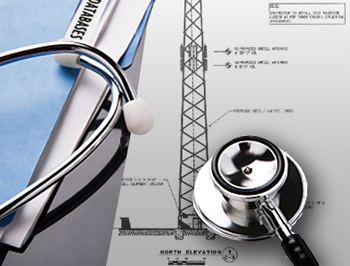 A recent search for a site, listed correctly on a major tower company’s database for an Alabama tower, provided differing results in major commercial databases due to their reliance upon FCC information.

One primary program was displaying the company that sold the structure almost five years ago.

If a viewer was industrious enough to try and locate the owner, the contact email would bounce and a call to a listed telephone number would end up reaching a confused receptionist at an Olympia, Wash. health care clinic.

Proud owners embellish their count
Publically traded companies typically provide tower counts each quarter in their Form 10-Q, and the Securities and Exchange Commission requires a high level of accuracy in those reports. But in order to capture potential customers’ attention, some tower owners in the private sector will creatively market the co-locatable towers they have.

WirelessEstimator found that a number of companies had far less than they claimed.

Oftentimes publicized “towers” turned into raw land opportunities, structures that were owned by another company or towers that were in development – a discreet way of affirming it could be a year or two before they’re available, and possibly never.

Contractual agreements for management of shopping mall rooftops as well as those of major retailers help to beef up some companies’ site offerings.

One site provider had over 10,000 site opportunities on a major search site, but had just a couple of dozen towers, the rest being retail locations.

Broadcasters were particularly proud of their assets and presented high tower counts. However, a number of their locations were found to be studio locations or AM arrays where each tower was being counted as a marketable co-location opportunity.

A leading  broadcaster presented a list of over 1,000 towers, but a more accurate count of its available properties ended up to be less than half that amount.

WirelessEstimator reviewed databases and published site lists of over 1,000 companies to assist in identifying consolidators with ten towers or more in the U.S. that are being marketed for co-locations to be able to provide the industry’s first list of the nation’s largest tower companies.

Although some tower structures were clearly incapable of accepting any additional tenants they were counted in the company’s portfolio since they did have the capability of being retrofitted or replaced by another tower.