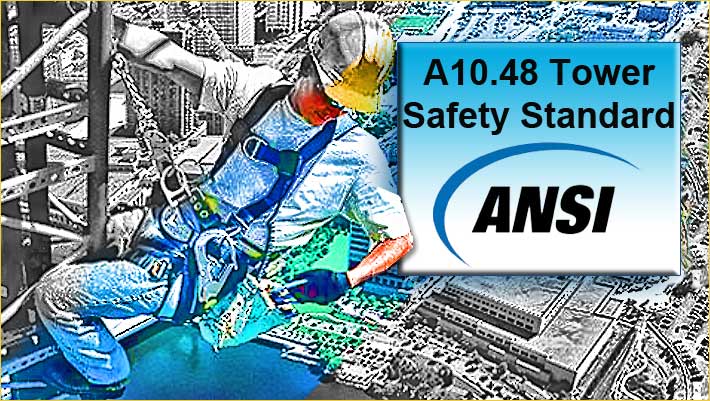 The long-awaited game-changing ANSI standard, A10.48-2016 – heralded as being the first comprehensive standard encompassing the entire wireless construction, service and maintenance industry, and clearly living up to its expectations – has been finalized, according to the National Association of Tower Erectors (NATE) and other individuals knowledgeable of its completion.

The 107-page standard, although currently not available for purchase, is entitled: Criteria for Safety Practices with the Construction, Demolition, Modification and Maintenance of Communications Structures.

The American National Standards Institute (ANSI)/American Society of Safety Engineers (ASSE) standard is the newest of 49 other A10 construction and demolition operations standards.

NATE plays a pivotal role in standard’s development
The National Association of Tower Erectors and its members were key supporters and contributors to the standard that had been a work in progress since 2010, but its need had been discussed many years before then.

In addition to numerous standards, OSHA directives, FAA and FCC documents, NATE training guidelines, standards and resources were referenced for supporting information contained in the A10.48-2016  standard whose price has not been identified.

Gordon Lyman, President of eSystem Training Solutions, is chairman of the A10.48-2016 subcommittee.

“The final version of the A10.48 standard is a by-product of over six years of hard work and diligence by a group of dedicated organizations and subject matter experts,” stated subcommittee member Don Doty, Regulatory Compliance Advisor with FDH Velocitel. “The release of the A10.48 Standard is one of the most significant developments to have occurred in my 43 years working in the industry,” added Doty.

“The A10.48 Standard will provide the ultimate road map for companies and workers to adhere to in order to raise the bar on safety and quality in the industry,” said NATE subcommittee member Kathy Stieler from Electronics Research, Inc. “This transformative standard will fill a huge void that currently exists right now in the industry,” Stieler explained.

However, they will likely agree that the standard was through the dedication, assistance and support of many other stakeholders.

Although there are 33 Appendices in the standard with additional information relating to subject matter, they are not a part of the approved standard, but provide a wealth of forms, diagrams and other details that will assist the industry.

The industry will also benefit from a Hoist Hand Signal Chart, Typical Load Part Configurations, Tag Force Loads, Horizontal Support Bracing, and other areas of information that are now available in one standard.

NATE, ASSE and the Telecommunications Industry Association (TIA) will be providing additional information and educational opportunities regarding the new standard in the coming weeks, as will Wireless Estimator.

NATE and Wireless Estimator will also be providing an update in the near future to industry stakeholders on how to purchase the A10.48 Standard when it is officially published.

“It’s a great day to be affiliated with NATE as the A10.48 Standard represents yet another tangible reminder of the leadership role the Association is playing in the marketplace,” stated Executive Director Todd Schlekeway. “NATE is proud to have played a crucial role in establishing the standard and helping get this valuable resource across the goal line.”

In May, OSHA said that communication tower construction and maintenance activities are not adequately covered by current OSHA fall protection and personnel hoisting standards, and they plan to revise their standards.