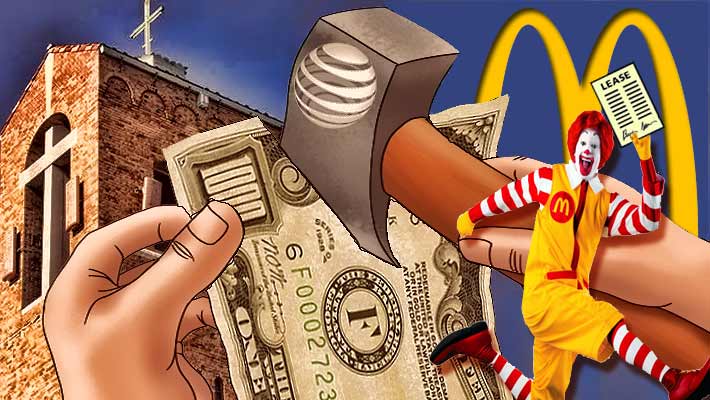 Black Dot Wireless said in earlier lease-reduction correspondence that AT&T deserved a break every day on a new lease, otherwise they were likely to move to McDonald’s. Some landlords bowed down to their wishes, especially church pastors who relied upon AT&T’s monthly tithings to help shore up their budget.

According to a number of news reports that republished information from an article by Fierce Wireless, AT&T is in a full-court press to force tower owners to take new restrictive terms or the carrier might relocate to an alternative site.

The articles state that the push to lower rates dovetails with AT&T’s SVP of wireless network design Tom Keathley’s August statement that the carrier was concerned about escalating rental rates that he said were not “sustainable”.

But a closer look appears to indicate that recent correspondence in the article is a continuation of veiled threats that the carrier has been utilizing since at least 2004. This time, however, they’re requiring the landowner to agree to onerous revisions to their contract.

Letter purported be from AT&T had Black Dot’s fingerprints
One letter being sent to tower owners, signed by Atlanta-based AT&T AVP, Gram Meadors, Contract/Sourcing, said, “AT&T is instituting a new program to evaluate terms and conditions of all leases coming up for renewal, explore advanced renegotiation options and consider possible alternative site locations.”

However, Meadors’ correspondence on an AT&T letterhead has an address of 22721 Las Ramblas, Suite 300, Mission Viejo, CA 926691 which is the location of Black Dot Wireless, LLC, an independent commissioned contractor that has been using various approaches for many years to get landlords to reduce their leases.

Ploys are plentiful in the lease-reduction game
In 2007, Black Dot sent out brochures to landowners identifying that AT&T had signed master lease agreements with Walmart and McDonald’s, and they were using that leverage to get rent reductions, otherwise they would most likely move to those locations.

According to Ken Schmidt, President of Steel in the Air, Inc., a leading tower leasing consultancy firm, he was not familiar with any towers that were moved to Walmart or McDonald’s if the landlord didn’t agree to new terms.

Over the years, Black Dot’s rent reduction pitches have changed, and the most recent one is that their “first choice is to create a new agreement that serves all parties well.”

Unfortunately, the tower owner isn’t being treated well and his structure may be in poor health if he signs the agreement that would allow AT&T to “utilize the entire RAD center without any ‘per touch’ rent upcharges”.

New agreement has AT&T monopolizing some towers
That provision would allow AT&T to put any type of antenna and/or other equipment on the tower regardless of weight or wind loading, and possibly cause the tower to be at capacity, preventing any additional tenants to locate on the structure unless they were to absorb heavy retrofitting expenses.

In addition, the landlord would have to agree to:

Two small tower owners contacted by Wireless Estimator said that they agreed to “similar” terms that Black Dot is requesting and also reduced their 3% annual rent escalation to 1%.

One of the agreements indicated that the 1% wasn’t cumulative and a 10% increase would be paid in the 10th year of the new lease.

Another tower owner told Wireless Estimator that he has instructed his staff to not answer calls from Black Dot or Md7, a similar lease reduction contractor, “and we won’t even dignify their emails with an answer,” he said.

Md7 is also asking for similar RAD center allowance for any equipment. In addition, their new agreement might be interpreted to require the tower owner to provide FirstNet equipment on the structure without compensation, according to one tower owner.

He said, “The risk that AT&T might move elsewhere if the landlord doesn’t agree to the new terms is a ‘hollow threat’. Moving to another site could cost them a capex of $150,000 or more. Do the math, it makes no sense.”

Some owners are just saying, no
Another small tower owner said that he received a letter from Black Dot and did contact them. He said that they were “seriously engaged” in moving to another site if he didn’t reduce his monthly rent.

He questioned, “What a laugh. There is nothing around for miles to co-locate upon. What are they going to do, build a new 280’ tower to save $600 a month?”

Md7’s letter to landlords requesting lease amendments states: “These modifications will allow AT&T to meet current business requirements and enhance your site’s value to the network.”

The new agreement also enhances AT&T’s ability to increase their compound footprint for additional equipment with no increase of their monthly rent.

Are single and smaller tower owners more susceptible to being swayed by Black Dot and Md7’s threats? Yes, said Schmidt.

He estimates that between 10% to 20% agree to the concessions, with a higher percentage for not for profits such as churches and municipalities that don’t want to jeopardize their steady wireless source of income.

A New Jersey-based tower owner, John Paleski, President of Subcarrier Communications, said that he has seen a number of building owners give in to high pressure pitches by lease negotiators.

“Sadly, they’re not aware of the true value of their rooftop asset and are easily persuaded by Black Dot and others to agree to below market offerings,” said Paleski who owns 322 towers and a rooftop management company.

Carrier says it didn’t threaten to terminate agreement
After Cingular Wireless bought out AT&T Wireless in 2004 for $41 billion, Cingular launched an aggressive program to halve the cell tower rent amounts paid under contracts with more than 15,000 landlords.

City attorney Clint Krislov said, “If Cingular needs to cut costs to make  the merger profitable, it should find legitimate ways to do that, rather than  by shortchanging local governments and other site owners across the country of their agreed rents.”

The City sued Cingular, alleging that Cingular “attempted to coerce Parma into reducing rent and licensing fee payments by threatening to terminate the agreement, and was therefore in breach of the agreement and could not terminate it.”

Cingular filed a motion for judgment, arguing that no controversy existed because it made no statements that it intended to violate the agreement.

On Aug. 5, 2005, the district court dismissed the case without prejudice and denied Parma’s motion for class certification. Although the court said that the letter that was sent out by a third party was “ambiguous,” it did not state that Cingular was going to terminate the agreement.

Parma appealed the decision before the U.S. Court of Appeals for the Sixth Circuit in 2008 and lost.