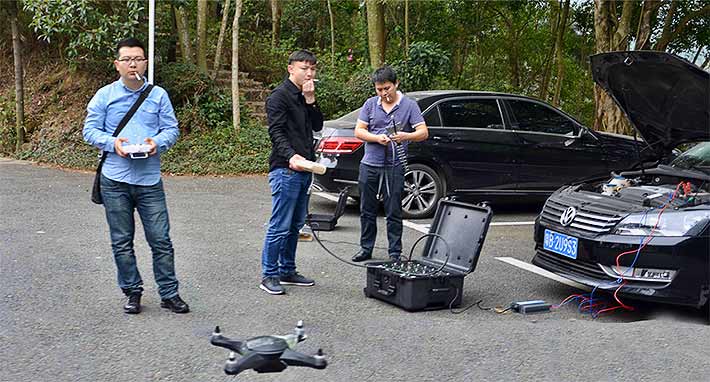 C.T.S. Technology, above, which makes jamming devices for drones, cell phones and other GPS and wireless products, has ignored the FCC’s repeated attempts to collect a $35 million fine. The FCC will have an easier chance of collecting $48,000 from a Florida man who used a jamming device.

Although it might not be able to collect it, the Federal Communications Commission issued a $34.9 million fine forfeiture order yesterday against C.T.S. Technology, a Chinese electronics manufacturer and online retailer, for marketing and selling signal jamming devices to U.S. consumers.

Following an investigation by the FCC’s Enforcement Bureau, the Commission proposed a $34,912,500 fine against C.T.S. Technology for its marketing of 285 jammer models in the U.S.

The FCC also ordered the company to ensure that its marketing complied with Federal law. Although the company did not respond to the proposed fine, formally known as a Notice of Apparently Liability (NAL), the company has since taken several measures that appear to bring its marketing into compliance with U.S. law prohibiting the marketing, sale, and import of signal jammers.

Because the Commission did not receive any evidence from C.T.S. Technology to contradict the findings in the proposed fine, yesterday’s decision, formally a Forfeiture Order, affirms the full proposed fine against the company

Since C.T.S. never acknowledged that they received the NAL, the FCC contacted the Chinese government to issue the NAL, as allowed by international law.

But the agency’s request has been ignored by China’s designated authority for service matters and the agency felt it was appropriate to enter the forfeiture document.

C.T.S. has 30 days to make the payment. The FCC has not stated what additional actions it will take if it doesn’t receive payment.

Agency hits an individual with a $48,000 fine for jamming
The FCC also announced yesterday that it has issued a forfeiture order to collect a $48,000 fine given to a Seffner, Fla. Hillsborough County government employee on April 29, 2014, who used a cell phone jamming device on his daily commute to and from Tampa.

According to the FCC complaint, Humphreys was charged the statutory maximum of $16,000 each for unauthorized operation, use of an illegal device, and causing intentional interference.

On April 29, 2013, the enforcement bureau was contacted by Metro PCS that its cell phone tower sites had been experiencing interference during the morning and evening commutes in Tampa.

Eight days later, agents monitored the suspected route and the agents determined, using direction finding techniques, that strong wideband emissions within the cellular and PCS bands (i.e., the 800 MHz to 1900 MHz band) were emanating from a blue Toyota Highlander SUV.

On May 9, 2013, the Hillsborough County Sheriff’s Office, working closely with the agents from the Tampa Office, stopped the vehicle, and when they did they reported that communications with police dispatch over their 800 MHz two-way portable radios were interrupted as they approached the SUV.

An inspection of the vehicle revealed the cell phone jammer behind the seat cover of the passenger seat. Humphreys stated that he had been operating the jammer to keep people from talking on their cell phones while driving.