Update: May 25, 2016 – The tower technician who died yesterday had been working on a project installing a 310-foot self-supporting tower for Appalachian Wireless. The Federal Communications Commission’s database identifies a construction completion date of May 25, 2016.

Appalachian Wireless has built a number of towers recently. In March, they built one in Mud Creek, Ky. and in April, another in Hendricks, W. Va. It is not known if Tyler Comer’s picture (below) was taken and posted on his Facebook page on March 16, 2016 while he was erecting one of those structures. 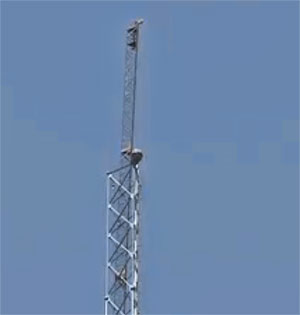 Comer was on a stacking crew that had used a gin pole to erect this 310-foot self-supporting tower.

The 19-year-old technician fell from the Morgan County structure. On his Facebook page Comer said his employer was S&S Tower Services and he had been hired in August of 2015. Numerous calls to the tower company located in Saint Albans, W. Va. failed to connect.

There is no business relationship between S&S Tower Services and S&S Communications Specialists Inc., an erector that had two technicians die in 2014 when a tower collapsed in Nutter Fort, W. Va.

Comer was the fourth industry fatality this year. There were four fatalities in 2015, down from 2014’s 10.

Kentucky State Police have identified a technician that fell from a cell tower in Morgan County as 19-year-old Tyler Comer of Charleston, W. Va.

In a statement, authorities said the 19-year-old was working on a 105-foot cell tower when he reached for his tools and fell at 7:05 p.m. yesterday evening on a structure off of Hogg Branch Rd. 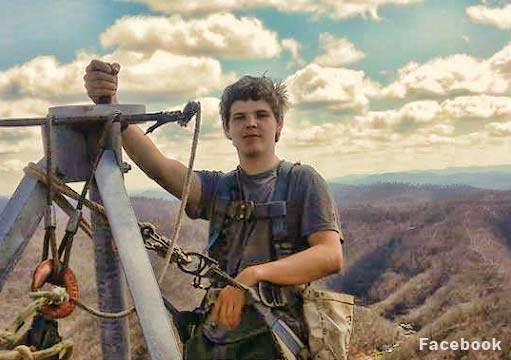 The incident remains under investigation by Kentucky State Police.

According to a news report from LEX 18, the Morgan County Coroner said that Comer was coming down from a cell tower when he fell 100 to 150-feet and that he was contracted through Appalachian Wireless.

Wireless Estimator will provide additional details as they develop throughout the day.

The industry has suffered an alarming number of deaths recently. On May 16, 2016, Daniel Patrick Harrison, 25, was killed when he fell from a self-supporting tower in Maryland. Within the same hour, Thomas Edward Taylor, 37, was electrocuted while loading cribbing onto a boom truck in North Carolina.

Although not work related, Derreset “Dezzy” Brown was killed May 6, 2016 when a tractor trailer crashed into his motel room on his day off after Brown completed a number of carrier upgrades in El Paso, Tex.