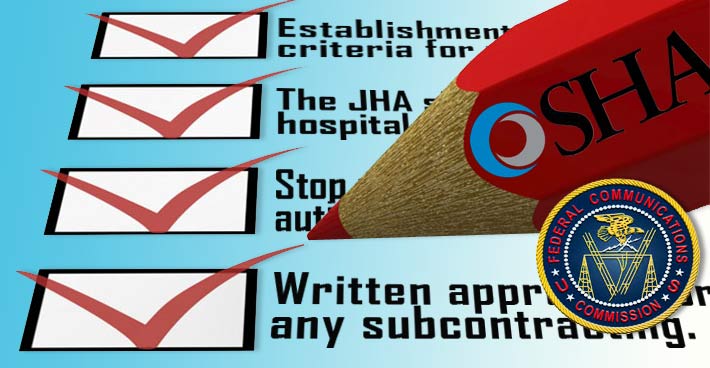 If the best practices (BPs) being developed by the Federal Communications Commission and the Occupational Safety & Health Administration are implemented nation-wide, it is likely that the industry will see a marked improvement in fatality and injury counts.

It will also assist in reducing the number of companies in the industry that provide lower bids because they’re not burdened by a key and imperative operational cost, providing safety training and enforcing it on the jobsite, as well as having to maintain all of the pass-down requirements of the primary contractor.

The two federal agencies began compiling BPs immediately following their successful 2014 workshop during which safety advocates discussed many of the practices that they successfully employed to keep their workers safe.

Following those panel discussions, both agencies began soliciting additional information through emails and conference calls with stakeholders at all levels of the contracting chain to build a positive culture of safety and accountability.

Their 14-page document, still in draft form, is getting final reviews before it is released, but according to a number of industry observers contacted by Wireless Estimator, who have contributed to the BPs, the document is an exceptional guideline.

It’s also a CliffsNotes for civil trials
Although the document identifies that it is advisory in nature, and informational in content, it is not a standard or regulation and it neither creates new legal obligations nor alters existing obligations created by OSHA standards or the Occupational Safety and Health Act.

Therefore, if it is not followed, citations cannot be issued by OSHA or the FCC.

And although it would make good sense to comply with the BPs, if a company doesn’t observe them, they are then exposed to a greater civil liability if an accident or fatality results in a lawsuit since jurors will most likely agree with the plaintiff if industry best practices, readily available, were not followed.

As an example, OSHA requires on construction projects, according to 1926.50(f), a minimal amount of information of telephone numbers for physicians, hospitals, or ambulances to be conspicuously posted on job site, unless 911 service is available. However, in many instances cell phones will not work in rural areas, or high RF will compromise a carrier’s signal, and the new document expands upon a best practice.

The BPs’ draft now states that in the Job Hazard Analysis, “It should include the precise location of the work site, the location and contact information for all local emergency services including the nearest hospital or medical center.”

One of the best tools for acquiring this information has been through Wireless Estimator’s Emergency Services Locator that has been used by the a majority of contractors for almost six years, where thousands of industry jobs are rolled every week that also provides a best practices JHA that meets and exceeds all project requirements set forth in ANSI/TIA-1019-A’s Check List for Site Evaluation for projects.

Verification of subcontractors
As discussed during 2014’s workshop and the second workshop held Feb. 11, 2016 at FCC headquarters, a primary concern by all stakeholders was their inability at times to identify what subcontractors were performing work on a project.

To ensure that only qualified, licensed and insured subcontractors are on site, the BP states that it should be mandated that written approval must be obtained for any subcontractor.

Another BP is the requirement to establish a clear criteria for vetting and approving of all contractors and subcontractors.

Document provides a little more clarity to a two-person on site requirement
A frequent question to safety officials is: Is there a requirement to have a minimum of two men on a site that is identified in a regulation or standard?

It gained considerable attention last year when two climber deaths occurred at a time when there were no other personnel on the jobsite.

Even though OSHA 1926.502 (d)(20) is only one sentence long, it can be shortened to a mere three words: provide prompt rescue. (“The employer shall provide for prompt rescue of employees in the event of a fall or shall assure that employees are able to rescue themselves.”)

It’s obvious that a tower tech can’t do a self-rescue if he’s injured and OSHA and FCC personnel appear to agree, at least in regards to having someone available to summon emergency personnel, providing the following new draft language: Contractors must ensure that there is a competent person on site at all times. This person should monitor the mental and physical wellbeing of climbers on their team. The competent person has the responsibility and obligation to remove an unfit worker from climbing duty for any reason.

“Arguing that a competent rescuer could also be the sole individual on the jobsite doesn’t make sense. It’s sort of like physician heal thyself,” said one spectator following the Washington workshop.

Another safety executive said that some projects require multiple people to be safe. “In example, if you have two people on the tower, you’ll need a third person – possibly more – to respond to an emergency. Each project is different.”

A carrier executive at a luncheon also questioned whether wireless civil workers required the same oversight and safeguards.

Insightful and logical best practices are included
The document not only focuses upon BPs for tower climbers and crew workers, but covers responsibilities of carriers, tower owners, turfing vendors and tower construction and maintenance contractors.

In addition to verification of subcontractors, additional BPs in the document include:

No date is being provided for the release of the final BPs. Wireless Estimator will provide additional information and the final document when it is available.

The draft document is available here.