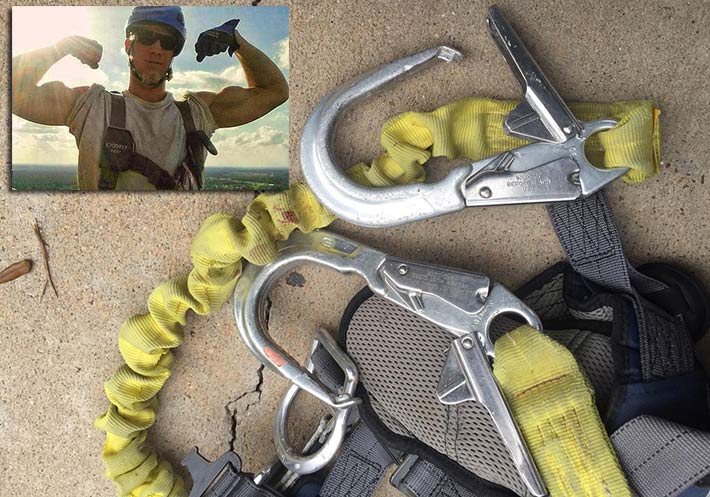 The wife of the injured climber provided the above photograph of the lanyard as it appeared shortly after the incident. She said her husband had informed her that he had been tied off as required, but when he fell the lanyard’s gates gave way.

A 26-year-old tower climber is expected to be in intensive care for another ten days after he fell from a guyed tower in Rosenberg, Tex. when his personal fall protection equipment failed after he slipped from a brace on a climbing face as he was descending after a day’s work on an LTE project for AT&T.

Wesley Scott, who had been climbing for approximately three years, was working for Advanced Cellular Solutions of Coppell, Tex., whose owner, Ken Khanh Nguyen established the business in July of 2013.

Scott had reportedly been using two lanyards as he worked his way down after 5:00 p.m., and when he slipped, both gates appeared to have failed, accord to his wife, Kirsten.

He does not recall at what height he was when the incident occurred, according Kirsten, but a co-worker on the tower informed her that he believed it was between 40 and 50 feet. Two other crew members were on the ground.

Scott landed on top of a waveguide bridge, and broke his right arm, dislocated and broke both knees and caused major damage to his ankles, as well suffering a fractured lumbar. He barely missed being impaled by the support posts, but the bridge’s buckling may have prevented further injuries.

A GoFundMe page has been set up in his name and any contribution amount will be appreciated by the family since Scott was the sole provider for his wife of four years and their three-year-old daughter.

According to Kirsten, Wesley had previously been hired in November as an independent contractor, but a week-and-a-half ago he became a full time employee for Advanced Cellular Solutions. He also had provided his own PPE equipment that he had purchased when he was with his previous employer where he was a top hand.

In the photographs provided to Wireless Estimator, it doesn’t appear that there was a safety climb cable on the 482’, 512 Huntington Rd. tower owned by American Tower Corporation. The structure’s climbing face had 1-1/4” solid diagonals and ¾” solid rod steps every 19-1/2” between the diagonals.

The tower appears to predate TIA-222-G which requires new structures to have a safety climb cable system. In addition, the center-to-center spacing between rungs, alternately spaced step bolts, or structural members used for climbing must be ten inches minimum and 16 inches maximum.

Advanced Cellular Solutions had been contracted to perform the AT&T LTE work by turfing vendor  Mastec  Network Solutions. A representative from Mastec investigated the accident as well an OSHA compliance officer, according to Kirsten.

Wesley, Kirsten and their daughter Lizzy live in Magnolia, Tex.