Execs’ eyes were glued to $700 million in contracts

A 57-year-old Anderson, S.C. man stole upwards of $450,000 from his cell site developer employer as well as the hearts and money of women throughout the country through the use of elaborate schemes using fictitious front companies, resumes and statements that he was a former high-ranking military veteran. 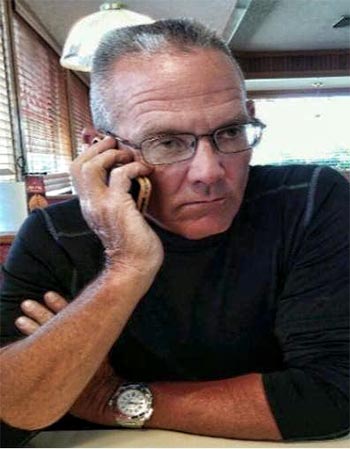 James Davis could receive up to seven years in prison for defrauding his employer. He fabricated that he had on the books $700 million in contracts. — Photo Courtesy: Polk County Sheriff’s Office

The District of Maryland U.S. Attorney’s Office announced last week that James Charlton Davis, lll pleaded guilty to wire fraud in an organized plan that defrauded his unnamed Landover, Md. employer for at least $240,000, and possibly double that amount.

According to U.S. Attorney Rod J. Rosenstein and Special Agent in Charge Kevin Perkins of the Federal Bureau of Investigation, Baltimore Field Office, from May 7, 2012 to March 13, 2013, Davis was the director of the electrical division for his company that provided construction and preconstruction services.

When applying for his job, Davis falsely represented that he had earned a Ph.D. from the Massachusetts Institute of Technology (MIT), when in fact Davis had not attended MIT, according to a statement from Rosenstein. Part of his duties as director was business development for the company.

He reported directly to the company’s Chairperson and its Chief Executive Officer. The company acknowledged that it had provided Davis with a company credit card and allowed him to make critical decisions in pursuit of new business, with little oversight.

Davis used these falsely-registered domains to send emails to himself and others at his employer to legitimize the fictional contracts he claimed to obtain on his employer’s behalf.  Davis also assumed the identity of an individual who investigation revealed was a contractor with a technology company.  Davis had previous interactions with this individual during his previous employment.

In July 2012, Davis told his employer that he had procured contracts with a technology company, headquartered in San Jose, Calif., to construct cell towers in Alpharetta, Ga.  Davis communicated with himself via email using the stolen identity of the individual, in connection with fictitious contracts with the tech company, and with other corporate entities for supposed upgrades to their data centers.

Davis represented, according to Rosenstein, that he was working with this individual to perform these contracts.  For several of the contracts, Davis sent communications to himself and/or others at his employer, or caused others at his employer’s company to send emails to various fictitious managers he had created—some of whom appear to refer to actual employees of the corporate entities with whom Davis claimed to be negotiating contracts.

Took expensive trips while scamming his employer
Related to his supposed efforts to obtain and perform contracts with these corporate entities, Davis traveled extensively and incurred bills for expensive dinners and 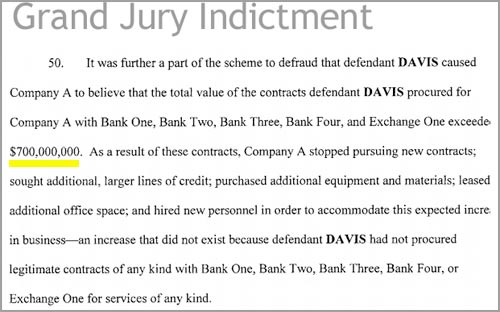 accommodations.  Davis sought and obtained reimbursement from his employer for travel, meals, equipment and labor costs.  In fact, however, Davis did not pursue any legitimate business and did not have interactions with any of these corporate entities on behalf of his employer.

Because of Davis’s fraudulent emails, his employer believed that demand for its services had grown exponentially.  As a result, expecting $700,000,000 in work, according to the 16-count indictment, his employer, a woman-owned business, stopped pursuing additional contracts, sought larger lines of credit and hired additional personnel.

In March of 2013, his employer learned of the fraud scheme when none of the invoices being submitted to these corporate “clients” – the fictional contacts at these companies – were being paid.  Davis’s employer started contacting these “clients” independently, and they all confirmed that they had no business dealings with Davis’s employer or with Davis.

Davis has agreed to forfeit and pay restitution of $240,000, the minimum amount of loss to his employer company.

Davis and the government have agreed that if the Court accepts the plea agreement, Davis will be sentenced to between 57 months and seven years in prison.  U.S. District Judge Theodore D. Chuang has scheduled sentencing for June 2, 2016.

Previous criminal background could have been a tipoff
Had Davis’s employer performed a background check they might have found a checkered past.

Although some charges have been sealed, in 2005 Davis was convicted of “knowingly, and with the intent to deceive, falsely represented in an application for an Airman Medical Certificate,” used a Social Security number that was not his. He also stated that he had not been convicted of a crime, but he had been.

In 2008 he was sentenced to 16 months in jail in South Carolina, and following his release in 2009 he was given supervised release for three years. However, in 2011 he was given another 50 hours of community service because he entered false employment information on his monthly supervision report, stating that he worked for GMR Electric in Piedmont, SC.

FBI had the help of a number of motivated women in capturing Davis
While Davis continued his ongoing criminal enterprise through his fictitious online sites, he was allegedly using online dating sites to meet unsuspecting females similar in age and defrauded them of money and property after gaining their trust. 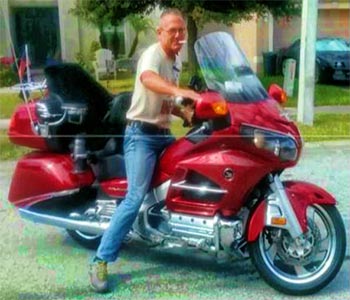 James Davis is also alleged to have defrauded a number of women out of money and property. — Photo Courtesy: Polk County Sheriff’s Office.

Living up to the FBI always gets its man expression, they did, but it could have been  due to some really ticked off women and the Polk County Florida Sheriff’s Office.

Last May, detectives asked for public assistance to track down Davis who was wanted on numerous fraud related charges.

They said that Davis presents himself as a former high-ranking military veteran, but has no recorded military history and had bilked a number of women out of money and property.

He was described as having a military haircut and commonly wore military t-shirts. In the presence of law enforcement, Davis would seek contact with officers and represent himself as retired military to avoid suspicion.

After posting the information on the department’s Facebook page, the post went viral with many women sharing it who had been taken advantage of by predators like Davis. Also, since Davis was a motorcycle enthusiast and frequently traveled on his red Honda Gold Wing, detectives thought they had a good chance of his being spotted.

After a number of Davis sightings were reported, Gallatin, Tenn. Police arrested him at the Sumner County Fair and he was turned over to the FBI.

A spokesperson for Polk County Sherrif Grady Judd told Wireless Estimator that their charges of Criminal Use of ID, Grand Theft over $20,000, Obtaining Property by Fraud, Solicitation, and Misrepresentation of Military Member were still open.

She also said that after their Facebook post, other women and law enforcement agencies have contacted their detectives about additional complaints and warrants involving Davis.