In RBC Capital Markets’ latest network and site leasing update, analysts Jonathan Atkin, Bryan Hyun and Bora Lee are projecting a modest improvement in leasing in the second half of 2016 from 2015 with Verizon and T-Mobile remaining the most active carriers.

Their report said that AT&T’s site additions should remain below the 1,000 mark at approximately 600. They expect AT&T will touch more than 30,000 of its 65,500 sites with LTE carrier-additions (1900 MHz) or overlays (WCS, AWS-3), representing an uptick in amendment and aggregate leasing impact versus 2015. However, they said it will still be well off the levels prior to the middle of 2014. 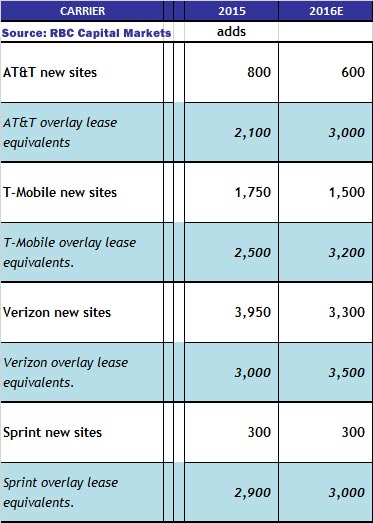 Late last month, two AT&T construction executives informed Wireless Estimator that their site additions would be approximately 900 to 1,200, but they noted that capex could be reshuffled at any time, affecting those plans.

The report states that priorities in 2016 for T-Mobile include a continuation of the 700 MHz coverage build; spectrum re-farming at 900MHz and macro-site densification for greater capacity. In addition, initial phases of the AWS-3 overlay, and small-cell densification will accommodate the 5 GHz band. Looking towards 2017, they said T-Mobile should continue with AWS-3 overlays, and a densification of the initial 700 MHz overlay in metro areas.

In 2016, Verizon will continue with new macro site deployments, although there will be fewer than in 2015, according to the RBC report.

Continued re-farming in the 1900 MHz band, touching roughly 15,000 sites, and increased small-cell deployments versus 2015 is expected.

The report did not contain U.S. Cellular projections.