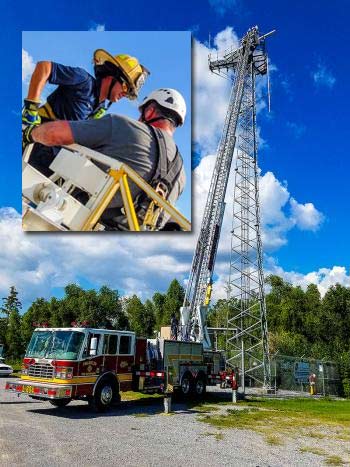 Franklin Firefighter Adam Fangue rescues service technician Gary Leger of Patterson from a radio tower in Berwick, La. after Leger got stuck at the top of a 100-foot ladder due to heat exhaustion.

A tower tech was rescued by the Berwick, Louisiana Fire Department Wednesday afternoon after they received a report that he was suffering from heat exhaustion on top of a 100-foot self support tower at the Jesse Fontenot Boat Landing.

Authorities said Gary Leger, 39, of Patterson, was overcome by the high temperatures and when he was unable to descent the tower he called 911 for help.

Eleven Berwick firefighters and four Franklin firefighters responded to the scene to assist Leger who is employed by A-Tech Systems of Laurel, Maryland, according to The Banner Tribune.