The National Association of Tower Erectors (NATE) and the Tower Family Foundation today announced the official establishment of the Ernie Jones Memorial Civil Engineering Scholarship at the University of Evansville in Evansville, Indiana. The official announcement, honoring the legacy of the late Ernie Jones, was made at the NATE Awards Luncheon during the annual NATE UNITE 2016 Conference in New Orleans, La.

Jones passed away tragically in October of 2015 while inspecting a tower in Oklahoma City, Oklahoma. He was a structural engineer who worked in the broadcast tower industry for 30 years. During his career, Jones served as a Professional Engineer and President of Consolidated Engineering, Inc. and a Vice-President of Structural Engineering at Electronics Research, Inc. Jones was also a participating member of the TR-14.7 Committee of the Telecommunications Industry Association and Electronics Industry Association since 1986 where he assisted with writing and approving the ANSI-TIA/EIA 222 standard which is the American National Standard for Steel Antenna Towers and Antenna Supporting Structures. 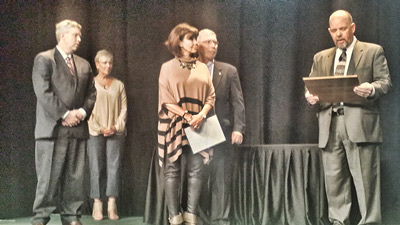 “On behalf of both NATE and the Tower Family Foundation, we are honored to recognize the legacy of Ernie Jones through the formal establishment of this scholarship program at the University of Evansville’s College of Engineering,” stated Tower Family Foundation Board of Directors member and former NATE Chairman Jim Coleman. “Ernie was one of the most prominent structural engineers in the United States and his contributions to NATE and the entire industry made an indelible impact on safety.”

The Ernie Jones Memorial Civil Engineering Scholarship will be a $2,500 scholarship awarded annually to a junior or senior level civil engineering student at the University of Evansville’s College of Engineering and Computer Science.

“On behalf of our entire family, we are humbled by this civil engineering scholarship that has been created in Ernie’s name,” said Kathy Jones, the widow of Ernie Jones who was on hand for the announcement. “I am honored to see that Ernie’s contributions to the industry will continue through the Ernie Jones Memorial Civil Engineering Scholarship at the University of Evansville,” Jones stated.