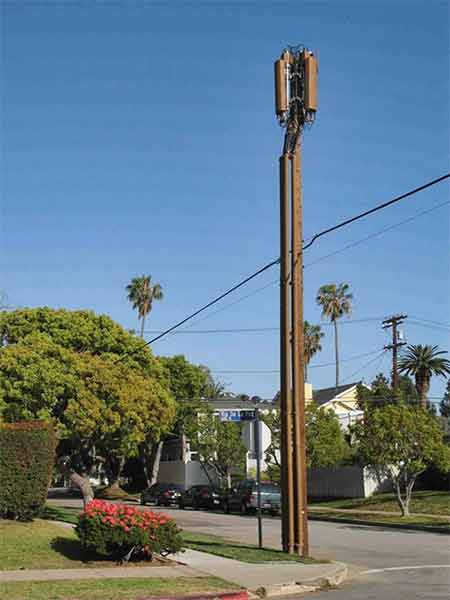 The Pacific Palisades Residents Association is concerned about this “cell phone tower” that was built next to a sidewalk in a public right-of-way in Los Angeles, Calif.

Cities and counties are continuing to slap moratoriums on the installation of towers and mini-macro sites in public rights-of-way. The most recent city registering concern is Boynton Beach, Fla. whose
officials  this month issued a moratorium on installing them until June so that they can examine the current regulations to determine if changes need to be made.

The action came on the heels of  Mobilitie requesting to install wireless communication facilities at five locations, including two near residential areas.

Fresno County, Calif. has also placed a moratorium after receiving requests from Mobilitie to install towers in Clovis and Fresno where it wants to build 120-foot-tall towers along public rights-of-way.

The county’s 45-day moratorium could be extended for many months.

Fresno County said in their recommended actions that according to state DOT code, utility poles, sign posts, and traffic signals must meet the criteria of breakaway, or traffic handling necessary highway features. They said “a 120-ft tall, 4-foot diameter reinforced concrete and steel tower is an unyielding obstruction in the ROW that is not forgiving to an errant driver who collides with it; thus, the tower does not meet this criteria.”

According to The Fresno Bee, a spokesperson for Mobilitie voiced her concern about the moratorium, stating, “Jurisdictions that choose to create roadblocks are doing their citizens a disservice and are ultimately deepening the digital divide. As a result, carriers will move on to build and invest elsewhere.”

In Mobilitie’s “Certificate of Public Convenience and Necessity,” which is required before a company can build facilities in California, the company said it “does not intend to construct any facilities, other than equipment to be installed in existing buildings or structures.”

David Wolfe, Clovis city attorney, said the city could authorize an encroachment permit to allow Mobilitie to construct towers in the city’s public rights-of-way, but “We don’t intend on leasing our rights away for a cell tower. Our concern is that this company isn’t very straightforward.” He said it appears Mobilitie has a “limited right of necessity,” which would require the city’s permission to build towers.

Statewide officials in Connecticut have also registered their concerns in past months that Mobilitie has given the appearances of a tower company attempting to rush through approvals without going through regulatory approvals normally required for cell tower construction.

The Connecticut Siting Council’s executive director, Melanie Bachman, in media reports, said that after reviewing information sent to municipalities by Mobilitie, she “is concerned about the lack of detail, including information about which mobile providers would use the towers and data proving the need for a tower.” She said Mobilitie might try to circumvent the application process by arguing that wireless service is a public utility that it is already licensed to provide.