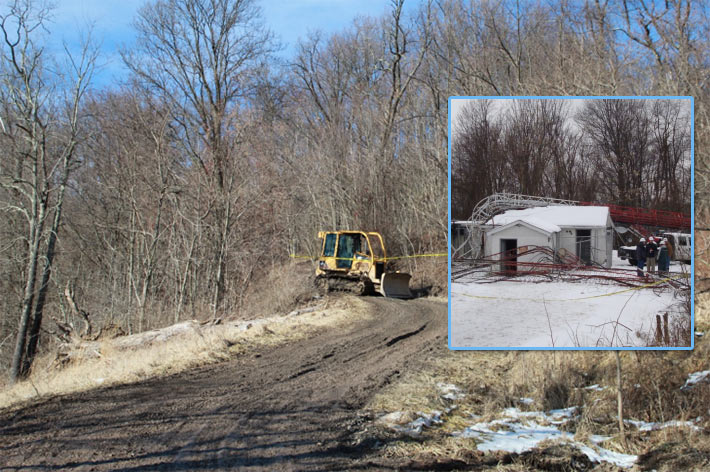 According to a NIOSH investigation, emergency workers had difficulty getting to the tower site due to the condition of the road. The road should have been improved prior to S&S working, according to the complaint.

The complaint filed last month, asking for at least $1 million, states that both companies were allegedly negligent in the accident which killed two of S&S’s tower technicians and a volunteer firefighter who responded to the scene. The Clarksburg, W. Virg. collapse of the SBA-owned towers also seriously injured two more employees on Feb. 1, 2014.

The lawsuit states that SBA contracted with FDH for design and construction relating to the communication tower after a carrier wanted to upgrade their equipment, and served as the general contractor.

According to the complaint, FDH provided a structural design to retrofit the 340’ guyed tower and hired S&S to execute the work.

The suit states that improvements to the access road were to be made prior to the work, but S&S was motivated to proceed by unseasonably warm weather.

At the time of collapse, of four S&S workers who were on the tower, two died and the other two were injured, the suit states. As the tower fell it allegedly struck wires supporting an adjacent tower, causing it to collapse, and killing a volunteer firefighter on the ground who had been summoned to aid survivors, the complaint states.

According to a National Institute for Occupational Safety and Health (NIOSH) investigation, emergency workers had difficulty getting to the tower site due to the condition of the road.

SBA asserts that the defendants failed to ensure that temporary supports were utilized during the replacement of the diagonal bracing and failed to comply with industry safety standards.

Indemnification should have covered loss
Under SBA’s master subcontract agreement, FDH is contractually obligated to control the work to be performed. SBA also stated that FDH did not have any workers present at the site prior to the collapse.

The plaintiffs claim that FDH breached their contract with SBA, and had agreed to indemnify SBA for damages as per their original contract.

It is unknown whether SBA had tried to collect from FDH’s insurance carrier under the indemnification agreement and was unsuccessful.

The master professional services agreement that FDH signed with SBA, regarding insurance, had the following requirements, according to court documents:

“10.2.3      Commercial General Liability:
Coverage, including Contractual Liability indemnification in Section 10.3 and Completed Operations Coverage, with no exclusions for Explosion, Collapse and Underground: with a coverage limit of not less than $1,000,000 if Consultant/Professional is performing any work on a tower, and $500,000 if Consultant/Professional is not performing any work on a tower, per occurrence.

Claiming monetary damages in excess of $1 million, SBA is seeking interest, attorneys’ fees and costs and other relief the court deems fit.

The plaintiffs and defendants said that they will not discuss ongoing legal action.