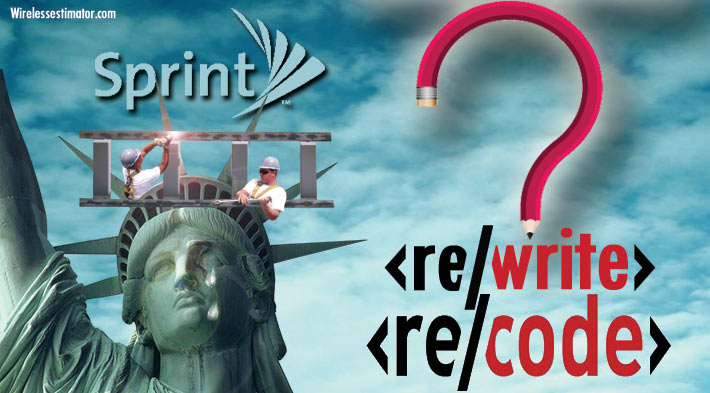 Facts that would have made better reading and more sense

By Ken Schmidt
After reading Wireless Estimator’s article, “Towercos tank after radical unconfirmed report of government competition,” and seeing the original article from Re/code on Friday, I felt compelled to respond. It seemed reckless to me that a website like Re/code could publish an unconfirmed report, have it copied by multiple media sources who fail to add any substantive research of their own, and as a result see over a billion dollars of market cap lost by the three public towercos and Sprint.  I was glad to see Wireless Estimator do their own article condemning the Re/code article and thought that I could add my own 2 cents that might add further color (and facts) to the story.

So, is Sprint really trying to radically overhaul its network?
On Friday, the website Re/code published an unconfirmed media report that also alleges that Sprint is attempting to reduce its dependency on AT&T and Verizon’s high-speed fiber optic cables. After this article was posted, shares of American Tower (AMT), Crown Castle (CCI) and SBA Communications (SBAC), were down 3%, 6%, and 8% respectively while Sprint dropped 9%.

Here are the reasons why we think this article is just bad reporting and the selloff of the tower companies and Sprint as a result was ill-deserved. Please note that we don’t own stock or perform services for either tower company and we don’t work for Sprint (but we do have a small holding in S stock).  In fact, we regularly assist landowners in negotiating cell tower leases against all 4 of these companies.  However, this article uses poor inductive reasoning to come to its overall and erroneous conclusion that Sprint plans on abandoning its existing collocations on American Tower and Crown Castle towers as part of its Next Generation Network.

Perhaps it is easier to share some facts/suppositions that we know/have about Sprint’s Next Generation Network and you should be able to see how the facts can be improperly evaluated to form a wrong conclusion such as the one that Re/Code came up with.

WHAT WE KNOW ABOUT SPRINT’S NEXT GENERATION NETWORK
Sprint has been issuing multiple Request for Proposals (and many, many revisions) for its Next Generation Network (NGN) for almost a year now. Previously, Sprint’s Network Vision network plan substantially reduced the size of the equipment at each site and consolidated multiple carriers’ (Sprint, Nextel, and Clearwire) frequencies into one set of equipment. The NGN is an attempt

to densify the Sprint network using a small number of new macrocells, but a significant number of mini-macro small cells.  Mini-macro cell sites are smaller than traditional cell tower sites, but larger than small cells.

RE/CODE’S IMPROPER DEDUCTIVE REASONING
Re/code and/or their source appears to be inferring from the limited public information available about the NGN and information from an unknown source that Sprint’s plan includes the relocation of existing collocations from Crown Castle and American Tower in mass to towers built by Mobilitie to government owned properties. We, like Wireless Estimator, believe that Re/code and/or their sources came to this conclusion improperly. While Mobilitie and Sprint are seeking to develop mini-macros on governmental land and utility structures, they are not going to terminate thousands or even hundreds of existing macro cell collocation leases with American Tower and Crown Castle as a result.

The mini-macro cells are complimentary to the macro cells and exist underneath and in-between the macrocells, creating what the industry refers to as a Het-Net or heterogeneous network. In a Het-Net, both components are equally necessary with the macro cells providing overarching coverage and supporting a significant amount of individual users while the mini-macros providing highly localized data capacity. Consider that it takes 10-30 small cells to replace the coverage of one macrocell. Sprint isn’t deploying mini-macros to terminate existing macrocell leases, they are deploying them to add capacity to their existing macros. They are certainly targeting governmental properties which are commensurately cheaper in states that have chosen to adhere to federal pole attachment regulations and rates. For those states that haven’t, there isn’t a significant cost advantage.

Sprint and Mobilitie may choose to use small cells/mini-macros to reduce the number of new collocations on existing American Tower, Crown Castle, and SBAC towers in urban and densely populated suburban areas where mini-macros make fiscal sense. However, in rural areas and sparely populated suburban areas, collocations on existing cell towers are too cost efficient and Sprint will continue to keep their collocation leases on such towers.  In other words, the Sprint NGN plan will reduce the number of new inbound collocation leases on macrocell towers like those owned by Crown Castle and American Tower, but by and far between, this won’t contribute to a wholesale move by Sprint from American Tower and Crown Castle towers to Mobilitie owned and developed macrocell towers on governmental property.

As it pertains to existing collocations on American Tower and Crown Castle towers, Sprint is under master leases with both companies that likely limit their ability to leave the towers and it is our strong opinion that Sprint is not that incentivized on a wide basis to do so. There will be cases where Sprint (and other carriers) will opportunistically use small cells to reduce their dependence upon some of their more expensive leases. However, the cost of relocating from one site to another is substantial ($100,000+) and the burden of getting zoning approval for a new tower near an existing one in most urban and suburban markets is difficult. Local municipalities push hard against proliferation of towers especially when there are existing towers that have structural capacity for the intended user of the new tower.

OUR READ ABOUT SPRINT’S NEXT GENERATION NETWORK

OUR CONCLUSION AND RECOMMENDATIONS
Unless Re/code and its sources can provide more documentation of the specifics of this plan, this story by Re/code seems to be more harmful than helpful and demonstrates what poor inductive reasoning can do. While we aren’t that optimistic that Sprint’s Next Generation Network will reverse Sprint’s fortunes, we also don’t see that the almost 10% drop in value was warranted from the Re/code unconfirmed reporting. If you were bullish on Sprint before, you should be even more so now.