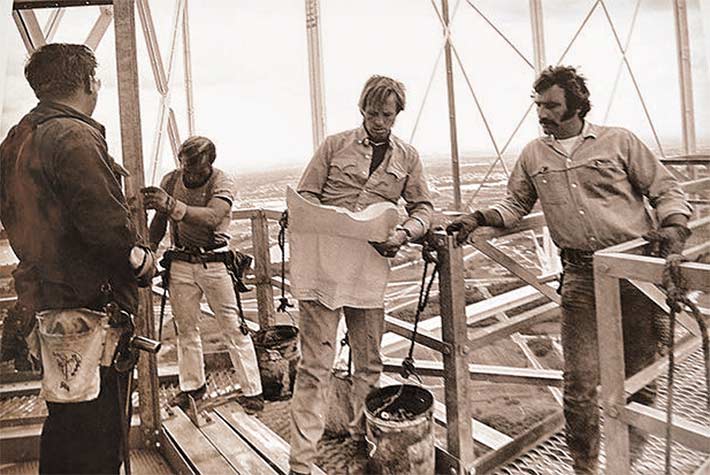 Don Barnard, at right, worked on the Shoreview tower. His brother, Wayne, was killed when the structure collapsed. Barnard was the only survivor in the incident that took the lives of his supervisor and six crew members.

On Sept. 7, 1971 in Shoreview, Minn., 32-year-old top tower hand Don Barnard’s supervisor asked him to handle some matters on the ground and he did not climb on that fateful day to assist his 20-year-old brother, Wayne, and five other members of the tall tower crew as they began to lift a section for the 1,280-foot tower’s candelabra platform.

When the antenna base assembly, which also formed the platform’s deck corner, weighing approximately 8.5 tons, was being lifted to the approximately the 1,000-foot level, according to information reviewed by Wireless Estimator, when it was approximately 10 feet above the ground the top of the tower began to buckle and then the 500 ton Ideco-Dresser guyed tower collapsed.

In an article published by the Shoreview Press, Barnard recalled the last words he would hear his brother say.

“The last thing my brother said to me when he started going up, he said, ‘Goodbye, Earth people,’ joking,” Barnard said. 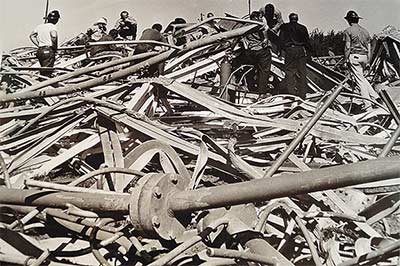 As the tower began to collapse at a few minutes before 10 a.m., Barnard said he saw his supervisor, about a foot away from him, get hit with a piece of steel in the head. He died along with the six men working on the tower.

“It was just raining — it was like someone opened up a machine gun with bolts and everything just coming at you,” he said. “It sounded like 10, 747s coming in for a landing,” Barnard said.

He said that when the more than 40 sections starting coming down, one of the guy wires catapulted a nearby flatbed trailer about six feet in the air. Barnard crawled under it and waited for the collapsing steel to subside, which most likely seemed like an eternity, but was approximately 10 to 15 seconds.

Barnard, now 77, said he had to identify his brother and co-workers at the morgue.

He believes that there were substandard welds on the tower sections that resulted in the structure’s collapse, and the tower’s failure had nothing to do with the crew’s rigging or procedures they followed while erecting the tower for their employer, National Steel Erectors, Inc. of Muskogee, Okla.

But an unnamed consultant represented by Kevin Kennedy Associates, an expert witness and engineering service company, said in his report that x-rays showed signs of factures in the weldments, but the “tonnage and twisting of the of the collapse may have contributed to the fractures.”

It was speculated that possibly the load lifting the antenna mount had become hung up on a bolt or structural member and the entire load was transferred to one leg.

The Minnesota Department of Labor and Industry investigated the collapse and said that a structural analysis demonstrated that the 3” solid leg in a top section failed by buckling through the combined effects of direct compressive loads and bending moments. The agency said that the total stresses of the leg were just under critical stresses prior to the attempt to raise the antenna socket.

The tower with five guy levels had 43 sections and the base legs were solid steel measuring 6.6-inches. With a 100-foot antenna, the structure was 1,375-feet above ground level.  No part of the tower fell at a distance of more than half of the structure’s height.

The Kevin Kennedy consultant said that the members below where the men had been working had not been fully bolted, a finding that MDOL also noted. He also stated that “when the workers noticed the platform 1,300 feet above shifted uncomfortably back and forth, they were told by the Oklahoma supervision that the movement was normal and not an issue.”

In today’s value, the tower structure damage was estimated to be approximately $6 million.

Numerous lawsuits were filed by the estates of the deceased and their settlements required non-disclosure agreement.

Correspondence with National Steel Erectors for additional information was not returned.