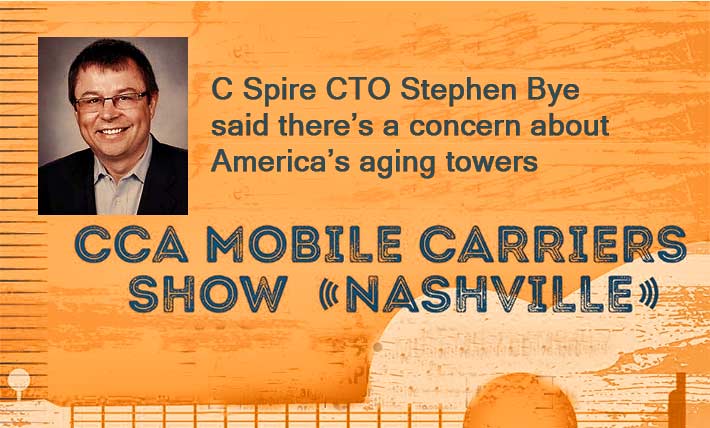 While all panelists agreed at yesterday’s Competitive Carriers Association’s Mobile Carriers Show keynote discussion in Nashville that unlicensed spectrum use by carriers was already in play, with subscribers using Wi-Fi connections, C Spire CTO Stephen Bye said carriers would have to be aggressive in making the experience better for consumers.

“Unlicensed has an important role in the delivery of services, but not by our choice. It’s the consumer’s choice,” said Bye, who was Sprint’s former CTO until September of last year.

Bye also discussed tower capacity concerns at the CTO roundtable discussion, stating that multifrequency is adding new radio units on the towers and many structures can’t handle the new equipment.

Bye said, “They are already big and heavily loaded. Some of these towers are 15 to 20-years old. Where are the new towers or antennas going to go?”

Although the age of a structure isn’t typically a concern since well-maintained towers will have a useful life of 50 years or more, capacity is, and overloaded structures didn’t just surface since last year’s CCA event, but has been an industry concern for the past 30 years or more.

Many companies rely upon the retrofitting work required for many of the nation’s structures. In addition, to assist in bringing costs down, other firms are developing new engineering applications such as KeyPoint Communications of Mandeville La. The company introduced at the NATE UNITE 2016 conference a method to refurbish structurally failing guyed towers.

Some panelists said at the roundtable that equipment costs were not as important as the challenges associated with upgrading tower sites.