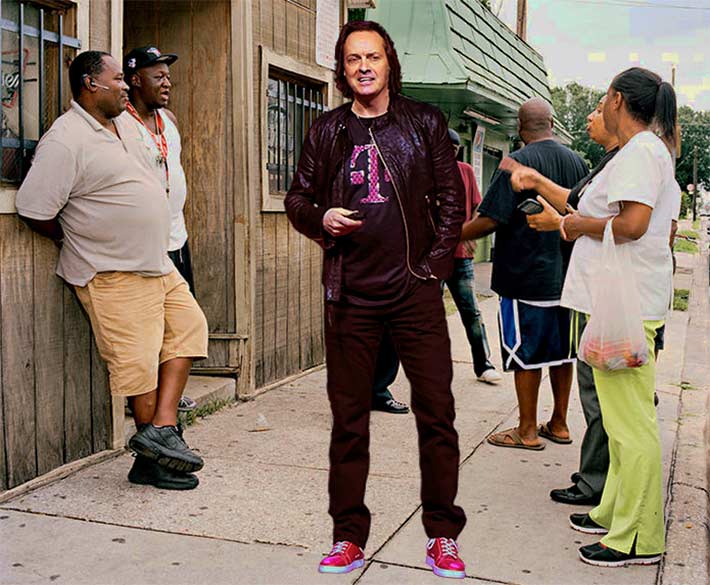 T-Mobile CEO John Legere will be happy to accommodate new customers from ghettos or from National Public Radio listeners in McMansions. He was surprisingly quiet after Claure made his Twitter comments.

Commentary –
Sprint has pulled a video ad on Twitter in which a waspy giggling white woman describes rival T-Mobile as “ghetto.”

The below ad opens with Sprint CEO Marcelo Claure sitting with “Actual Sprint, T-Mobile, Verizon and AT&T customers,” asking them about Sprint’s competitors.

The Bolivian/American told his preppy audience, “I’m going to tell you a carrier name, and I want you to basically tell me what comes to your mind.”

Claure then said, “T-Mobile – when I say T-Mobile to you, just a couple of words.”

“Oh my God, the first word that came to my head was… ghetto,” his ready for dinner partner to his right replies. Claure immediately nods and says “Yes,” and the woman continues.

“That sounds, like, terrible,” she says. “I don’t know…. There’s always, like, three carriers; there’s AT&T, Sprint and Verizon. And people who have T-Mobile are just, like….( she takes a long pause, as if carefully planning her next words) Why do you have T-Mobile? I don’t know.”

At least three of the other white people at the table laugh, one of them attempting to conceal her laughter with her hands. A black man puts his head down.

The clearly racist ad denigrating minorities and lower income people was an embarrassment.

Claure half-heartedly apologized in a Tweet, trying to justify the ad by stating: “We’re sharing real comments from real customers. Maybe not the best choice of words by the customer. Not meant to offend anyone.”

But it did, and Claure, a Latino should have known better.

Claure also fails to recognize that many of Sprint’s customers live in low income urban areas. America’s tower technicians, who have to maintain many of Sprint’s sites in crime-ridden neighborhoods, will attest to that.

Eight and a half hours after his initial tweet, Claure said that the ad had been pulled, chalking it up to “bad judgement.”

In contrast with Claure’s laughter at the ‘ghetto’ comment, he is a founding member of One Laptop Per Child, an organization focused on empowering the world’s poorest children by providing them with a low-cost laptop.

And here’s the kicker, Claure is a partner with soccer great David Beckham. The two of them last month bought six acres in Miami Dade County, Fla. for a 25,000-seat soccer stadium.

“We have the right site, the right ownership group, and a loyal base of fans counting down the days until our first match,” Claure said in a statement.

“We’re all-in on Overtown, and we couldn’t be more excited about moving forward with plans to deliver the most responsible stadium in Miami history.”

What Claure omitted was that Overtown is the epitome of a ghetto. It’s one of Miami’s poorest neighborhoods displaying some of the worst symptoms of urban decay.

But it’s likely that he’ll welcome all fans to the high crime area, even if they use their T-Mobile service to order tickets.

It’s difficult to know what a ‘responsible stadium’ is. It is easy to understand irresponsible comments from a company’s CEO.

T-Mobile CEO John Legere, who is typically active on Twitter, was noticeably silent on Sprint’s ad, stating, “I don’t think I need to respond.”