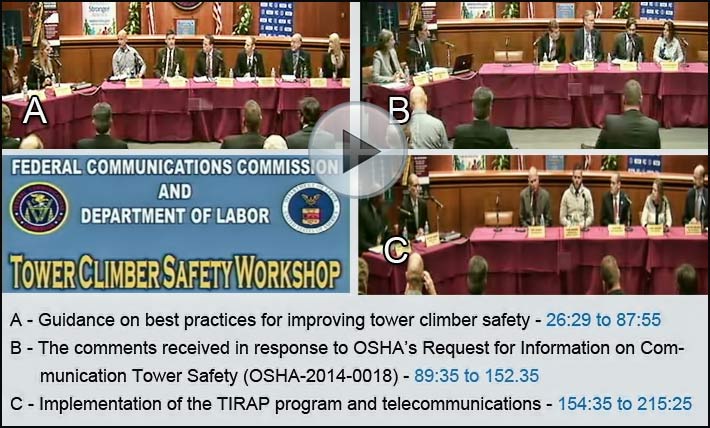 During his opening statement at a Department of Labor / Federal Communications Commission tower climber safety workshop on Feb. 11, 2016, FCC Chairman Tom Wheeler said that “everybody has to be proactive,” emphasizing the need to champion pre-emptive strikes by all wireless industry stakeholders in order to continue to improve upon a lower climber fatality rate that was achieved in 2015. A video of the event is available here.

Dovetailing into the workshop’s first panel discussion on Guidance on best practices for improving tower climber safety (26:29 to 87:55), Wheeler underscored, “We have got to have best practices that exist more than a document that is filed away.”

More than 100 attendees were present at the FCC Headquarters’ commission meeting room in Washington. A considerably large contingent also watched the event live on a web stream and participated in presenting questions to the panelists.

Referencing the FCC’s new initiatives such as the spectrum incentive auction and repacking process, Wheeler said, “Our challenge collectively is to make sure that we are ready to deal with that stress that is coming, and that is why we are gathered here today.”

Although Wheeler spoke about upcoming workforce pressures, panelists covered a number of industry issues ranging from standards compliance and enforcement to a greater focus upon training.

Since OSHA was founded almost 45 years ago, this is the first time that the agency has joined forces with another federal agency.

“This is a historic collaboration between government agencies, workers, all sectors of the industry,” Wheeler said.

A number of company representatives at the workshop said they would most likely use parts of the video for an all-hands meeting to further discuss many of the issues and the suggested avenues to correct them.