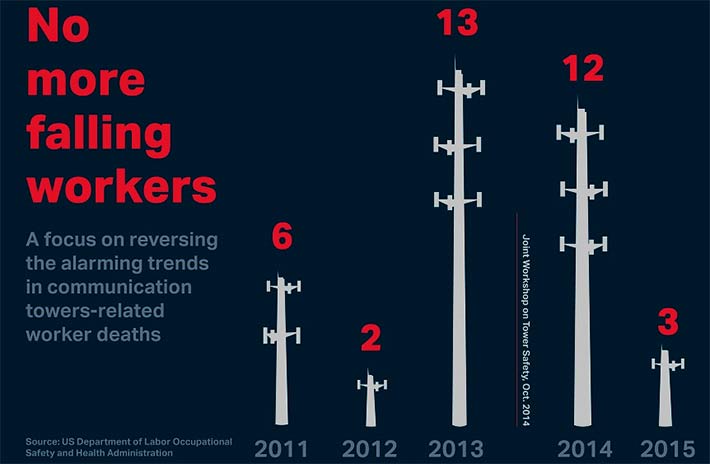 Thursday’s message at the Occupational Safety & Health Administration and the Federal Communications Commission workshop was loud and clear as stated by FCC Chairman Tom Wheeler.

“The industry that provides world-class wireless service must have world-class safety for its employees and contractors. Period,” said Wheeler in his opening remarks during the half-day session (video available here) at FCC headquarters in Washington, D.C.

Focusing upon a high fatality count of 13 in 2013 and 12 in 2014, and the efforts by stakeholders to reduce those deaths, Wheeler said, “The industry stepped up, and as a result, there were three fatalities in 2015. A significant decrease as a result of a significant increase in effort.”

“I started to say, there were only three fatalities, but you can’t when you are talking about a fatality because that is three too many.”

“So there was no celebration of that improvement at the kitchen tables in three households. And that is what we have to be continually mindful of as we work through today, and we then continue forward,” said Wheeler.

In his welcoming speech during the well-attended workshop, Matthew Colangelo, Chief of Staff, DoL,
also noted the smaller death total in 2015, citing the names of the deceased: Pedro Samuel Salazar, Matthew Vance and Ernie Jones.

But there was a fourth family sitting at the kitchen table that took no solace in 2015’s sharp decline, the family of 28-year-old Stephani Gurney who died on March 28, 2015 while she was being assessed for her ability to climb by Jostan Communication’s owner, Joseph Grimes and one of his employees above her, Stephen Butler.

OSHA opened their investigation on March 30, 2015, closed their conference a day later and closed the case on June 29, 2015.

It is not known whether Grimes was a sole proprietor and Butler was a 1099 employee, which would prevent OSHA from citing Jostan Communications.

What is acknowledged, according to a Concho County Sheriffs Office Deputy’s report obtained by Wireless Estimator was that it was an industry-related fatality since the owner was evaluating Gurney for her ability to climb a structure during a pre-employment on-site assessment.

Some discrepancies are due to OSHA counting fatalities that are not from industry companies such as a ham radio operator that was not employed elsewhere in the industry as an employee or sole proprietor of a tower maintenance company, who died after falling from an amateur radio structure, as well a volunteer firefighter who died while assisting at a site where two climbers died.

In addition, the industry’s number of employees that perform aerial work has been estimated at a range between 10,000 and 20,000, according to a blog post by Dr. David Michaels, the Assistant Secretary of Labor for OSHA, and Roger Sherman, Chief of the Wireless Telecommunications Bureau, FCC, regarding Thursday’s joint agency workshop.

A more accurate figure of workers with boots on the steel is 29,000, according to an extensive study undertaken by Wireless Estimator that was released last Feburary.