A number of Wireless Estimator viewers directed us to a YouTube video of a freewheeling reel of  what they believe is coaxial cable rolling down Route 40, heading east into Uniontown yesterday morning in Fayette County, Pa. You can view it in real-time, 10 times the speed and slow motion. 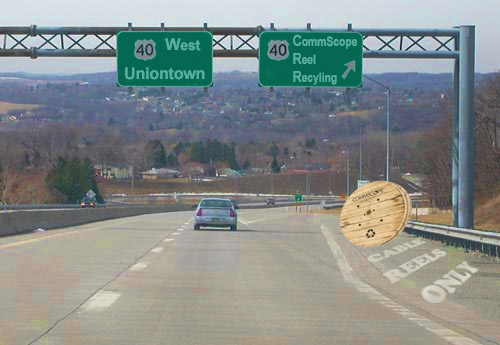 A cell phone video captures the alarming wrong-way travels of the reel that fell off of a truck’s trailer, bouncing to the opposite side of the highway where it passes four cars, turns into the guard rail, goes back across the highway, hits the median, and appears to be ready to end its journey.

But it then picks up speed and hits the guard rail again, coming to rest on its side, clearly ignoring the manufacturer’s instructions not to lay on its side.

Although the videographer, Dave Cole, said he wasn’t sure what vehicle the reel came off of, he said he believes it was the trailer in front of him since it “had straps laying loose and you could tell that it had come off of it.”

Cole told CBS Pittsburg that he was going about 20 miles per hour as he was filming, “and it was leaving me way behind,” but it most likely stayed within the legal 65 miles per hour limit, providing that it was going forwards – which it wasn’t.

A tower, possibly the cable’s intended location, is visible in the tree line of the  video.

Although the incident provides a gossamer amount of humor since no one was injured, it does emphasize the serious need to always check material and equipment tie-downs before and while traveling to a new destination.

Had drivers not been alert to the reel coming towards them, a serious accident or death could have occurred.