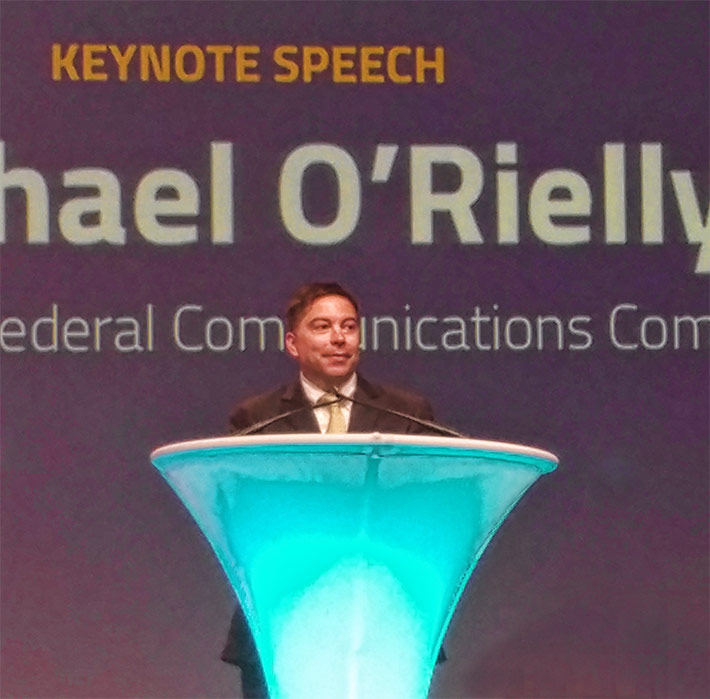 One key concern he had was that In 2014, the Commission eliminated unnecessary tower marking and lighting burdens on the industry while ensuring the safety of aircraft, and in 2015 he said it was a proud achievement

“However, last year, Congress passed the FAA Extension, Safety and Security Act of 2016, which included a provision that basically mandates that all towers ranging between 50 to 200 feet meet certain paint and lighting requirements. And two steps backward we go,” he said.

“The underlying reason for the provision, while admirable, appears to be based on incidents where crop dusters and other low altitude planes hit temporary meteorological testing towers. The actual language in the statute, however, can be seen to have broad applicability with narrow exceptions, which do not extend to permanent communications towers.”

Recognizing high expenses to paint and lamp a tower that he pegged at between $12,000 to $15,000, he believes it will cost the industry an estimated $750 million every five to seven years, and possibly higher.

“Again, I don’t want to see anyone hurt or, even worse, lose their lives. It is without question that there have been accidents involving crop dusters. But, it doesn’t appear that communications towers are to blame one iota. According to the requisite data, there is a good chance that, had the new provision of law been in effect, it would not have saved any pilot lives or prevented any crashes or incidents. And as you are well aware, we also must consider the lives of those that will climb and paint these communications towers,” O’Rielly said.

“Hopefully we will auction millimeter wave and 3.5 GHz in the not too distant future; and providers are generally densifying their networks. Then, there are the approximately 987 stations in the next 39-months that are part of the broadcast spectrum incentive auction repack,” O’Rielly said.

He said it was his understanding that tower companies have responded to the call and are ready to take on this challenge.

“I also have heard from broadcasters who admit that it is in their best interest to conclude the repack as quickly as possible, and obviously the winners of the 600 MHz auction are seeking the same. Kudos to those wireless carriers who have invested in tower companies to increase tower and antenna construction, and expedite installation and deployment efforts.”

“While some are rightfully concerned about the ability to meet the current deadlines, I think it is not irrational that we wait to see how the first stages go before jumping to any premature conclusions. If it looks like we cannot meet the 39-month timeframe, at some point, we can reassess. In the meantime, I suggest that everyone should take a deep breath as we head down the repack path together,” O’Rielly said.

Twilight towers and facilities siting
O’Rielly said that it was imperative that “twilight towers” are addressed.

“It defies explanation that we have not resolved an issue that we have known about for twelve years. I was hopeful when I spoke to staff after my last visit with you. The Commission was finally ready to act, but action turned into stakeholder discussions, and discussions turned into…nothing.”

But O’Rielly believes that there may finally be light at the end of this long tunnel, as the Commission formally issued an item last month seeking official comment on how this issue should be resolved.

“While the notice tees up the notion of grandfathering or making corrective filings as towers are identified, which I doubt the necessity of, I am willing to hear any and all suggestions. My goal is to ensure that we put an end to the twilight towers issue once and for all. Further, the notice includes, at my request, a definitive statement that there will be no enforcement action taken on legitimate twilight towers, meaning companies caught in this quagmire will not be subject to any penalties by the Commission. That’s good news,” O’Rielly said.

Access to the public rights of way and the tribal approval process are major concerns of the FCC, O’Rielly said

He claimed the industry is still experiencing excessive delays and moratoria when filing siting applications for access to locality rights of way.

“The record is replete with reports of long pre-application processes before an application can be filed or is deemed complete and applications going through two years or more of review before a decision is actually made. These long, intentional delays are also turning into de facto moratoria, with endless tolling agreements and excuses about insufficient resources or the need for new local laws. Verizon, for instance, has reported that at least 34 communities either have explicit moratoria or just refuse to process applications or engage with applicants. This is blatantly illegal.”

He said that those problems are compounded by the escalating costs of the tribal approval process, stating that one provider reported that in 2011, they were paying an average of $439 in tribal review fees per site, and now they pay on average $6,754.