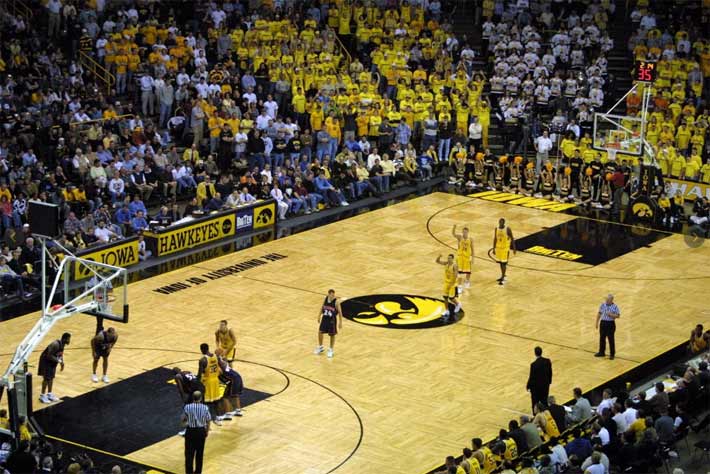 Whether American Tower was wrongfully terminated from their contract to put a DAS network in this arena will be determined in another court on Jan. 22, 2018.

U.S. Cellular announced on Wednesday that it has completed its DAS network at the University of Iowa Carver-Hawkeye Arena and Kinnick Stadium, much to the chagrin of American Tower Corp. (ATC) who is suing the university and its Board of Regents after they yanked a 2013 contract that ATC says is still in effect.

“The new network system supports a large concentration of people in one area, so Hawkeye fans at the game can keep in touch with family and friends, as well as post updates and photos to their social networks,” U.S. Cellular Senior Project Manager Dan White said in a press statement.

ATC entered into an agreement with the university that, the company said in court filings, allowed them to have “exclusive” rights to market carrier networks.

The Boston-based company said that it had spent over $241,000 in 2014 to get the project underway and they were ready to ink a deal with AT&T as the anchor tenant; however, ATC said that AT&T pulled out of the deal due to “budget constraints”.

The university, on Aug. 12, 2015 notified ATC that it was “immediately terminating the agreements because ATC had purportedly failed to timely construct the networks and procure contracts with wireless carriers,” according to court documents.

Court filings identify that the project was then given to Connectivity Wireless Solutions, a Georgia-based DAS designer and in-building provider that ATC had originally partnered with to design the systems.

In May, Judge Robert Blink rejected a request for a temporary injunction by American Tower to prevent Connectivity and the university from continuing with the project.

Blink ruled that ATC failed to show that it will suffer “an irreparable injury” without the injunction. He wrote that any damage to ATC’s reputation is speculative and that the loss of revenue isn’t enough.

In October, ATC amended its complaint, alleging that Connectivity engaged in a “covert campaign” to disparage the university from continuing with ATC because it had limited experience with stadiums and arenas.

Those comments and the termination, ATC said, have caused them harm in engaging work from other venues.

According to court documents, a June 23, 2015 email from Connectivity to the university attacked ATC’s limited experience.

“If you decided to give ATC another couple of months, I can assume that they would get into construction but possibly with two men and a truck,” it said.

Connectivity, established in 2008, has provided numerous DAS projects to universities throughout the country, provided a robust in-building DAS network for One World Trade Center.

American Tower’s DAS portfolio includes more than 1,000 properties and the company has provided installations in numerous locations from casinos to hospitals and universities