Bidding in the clock phase of the FCC’s incentive auction ended last week with wireless companies and others ponying up $19,632,506,746 for 70 MHz of new broadband spectrum, and although it was lower than a number of analysts’ projections, it was still the second largest auction ever. 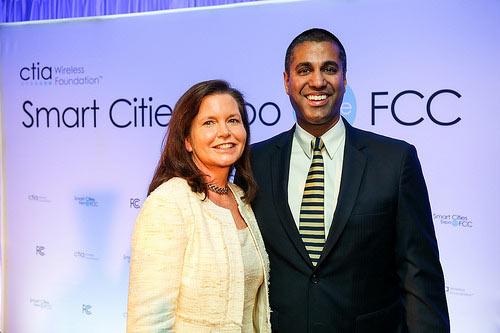 Just when auction fever seemed to be cooling down, CTIA President and CEO Meredith Attwell Baker is lobbying Congress and FCC Chairman Ajit Pai to begin another one. Pai was FCC Deputy General Counsel when Baker served as a Commissioner for two years.

The U.S. Treasury will get approximately $7.6 billion and trade group CTIA is already urging commissioners to schedule another one.

The auction  will kick start 5G, and FCC Chairman Ajit Pai, stating that he wanted to foster an orderly post-auction transition, said the Wireless Telecommunications Bureau is waiving the rules prohibiting communication between parties of any incentive auction applicant’s reverse auction bids or bidding strategies.

The auction will now proceed to the assignment phase where winners can bid for specific frequency blocks.

The National Association of Tower Erectors (NATE) congratulated the FCC on the successful auction.

“The closing of the bidding phase of the incentive auction is a tangible step in this process and the participants should be congratulated,” stated NATE Executive Director Todd Schlekeway.

“The real transition related work has not yet started, however, and it is paramount that the wireless carriers and broadcasters involved hire only qualified contractors that are experienced and equipped to conduct the re-packing work in a safe and quality manner. NATE has many safety resources available to the industry that can help ensure that safety remains the top priority as this work commences on both broadcast and cellular towers,” added Schlekeway.

NATE previously registered their concerns as to whether the allotted 39-month transition deadline was too ambitious, based upon available crews that work on tall towers.

However, CTIA President and CEO Meredith Attwell Baker said her organization is committed to working collaboratively with broadcasters to achieve the deadline.

Baker said, in a blog, that it should be noted that CTIA is asking wireless operators to wait a year and a half longer than in previous auctions to access the spectrum.

“Indeed, wireless carriers started using 700 MHz spectrum 21 months after the 2008 auction. Similarly, providers started using AWS-3 spectrum 21 months after that auction. Imagine buying a new house or business but not being able to access or use it until 2020. More than three years is an eternity to the wireless industry, and we all need to work together to meet the post-auction schedule, as any delays in access to 600 MHz spectrum risks delaying 5G services and the accompanying economic benefits,” Baker said.

“Congress and the new Administration need to help identify the next bands to auction now. Creating a regular pipeline to identify future spectrum will help maintain America’s role as the wireless leader,” Baker urged.

“While I am pleased that the forward auction has closed and we don’t have a failed auction on our hands, significant review is necessary to understand how the FCC rules and auction design impacted the results,” he said in release. “Although Congress provided a strong statute to utilize market forces to ensure spectrum is put to its most efficient use, including for necessary wireless voice and data licenses, the previous majority’s implementation appears to have been based on some assumptions that were far off the mark.”

Baker, a Republican, served as a commissioner for two years ending June 3, 2011 under President Obama. Baker became the President and CEO of CTIA in 2014.