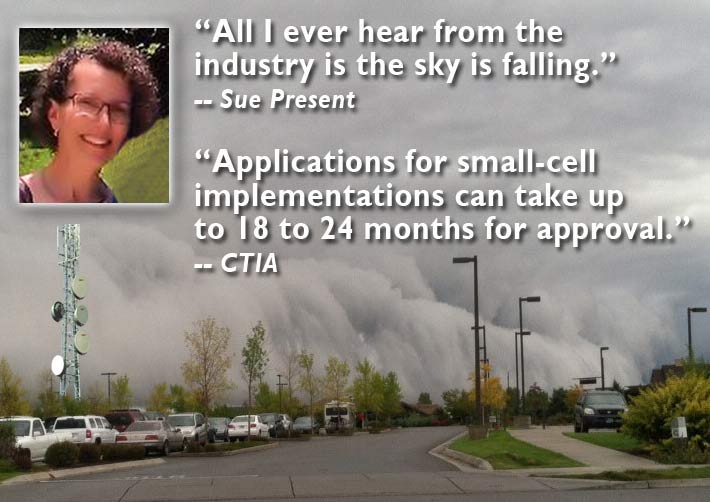 Mobilitie might have met the one woman in America who has the best chance with the FCC to have the agency bridle, what she describes as, the distributed antenna system (DAS) provider’s desire to “run roughshod over local communities” as it attempts to reduce rights of way fees that they say will impede future 5G growth.

But Mobilitie has the support of CTIA, and the influential trade group believes that there are onerous approval processes in many communities that could prevent the U.S. from enjoying the full benefits of new wireless technology due to fewer small cells being deployed, and they agree that high fees to use utility poles are a clear obstruction.

On Dec. 22, 2016, the FCC said it was seeking comments regarding streamlining its wireless siting policies, an effort by the Wireless Telecommunications Bureau (WTB) that stems, in part, from a petition for a declaratory ruling filed by Mobilitie, LLC titled: “Promoting Broadband for All Americans by prohibiting Excessive Charges for Access to Public Rights of Way (PROW).

Maryland resident stands out amongst commenters
Thirty-two commenters have responded to date with ten being posted Tuesday, nine of them extolling the need to limit wireless siting due to WiFi and cell tower RF concerns, one oxymoronically suggesting that the U.S. would be better off if it cut its wireless umbilical cord and returned to Ethernet cables.

But tucked in-between the commenters who don’t address the WTB’s interest in how to best build out a timely 5G network is correspondence from Silver Springs, Md. resident Sue Present who said that Mobilitie was trafficking in hyperbole and belonged to a wireless industry cabal of “conniving, gluttonous bullies.”

At their initial read, a WTB staffer could possibly pass off Present’s opening salvo as the rantings of a NIMBY protester concerned about RF wafting underneath their tinfoil chapeau.

Dangerous and inaccurate submissions alleged
Present provides a detailed and informative look at Mobilitie and other DAS providers’ attempts to ignore the regulatory process of local government units (LGUs) by using predatory pricing as a canard to get unfettered access to public rights of way, especially in Montgomery County, Md. where she lives and has intimate knowledge of both Mobilitie and Crown Castle’s attempts to use PROWs.

In her comments to the FCC, Present stated the concern of Montgomery County and other jurisdictions regarding the current process where cell site and DAS providers have hastily submitted “dangerously inaccurate, incomplete or otherwise flawed information in their rush to gain approvals and to complete wireless installations.”

In an interview with Wireless Estimator, she said, “All I ever hear from the industry is that the sky is falling.” She further stated that if the regulators were a little less accommodating to the siting community, and gave a little more attention to the issues, “technology and cooperation with municipalities would find a way to address many issues.”

Build it and they will come – to put the fire out
In her comments, she cited an instance in the 2007 Malibu Canyon, Calif. fire where three utility poles snapped because they had been overloaded by the installation of a DAS system by NextG Networks, a DAS provider acquired by Crown Castle in 2011. 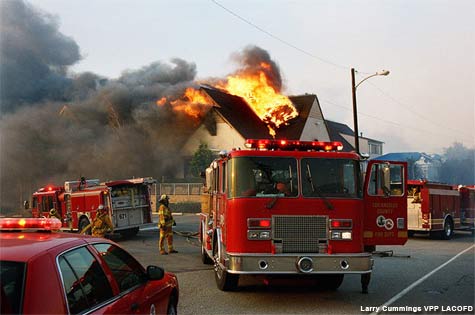 NextG agreed to pay $8.5 million into California’s general fund, and another $6 million to have 60,000 telephone poles inspected, after a pole with their equipment on it collapsed and started a fire that caused $15 million in damage.

The resulting fire burned 3,836 acres, destroyed 14 structures and 36 vehicles and damaged 19 other structures, resulting in a loss estimated at almost $15 million, according to the Los Angeles Fire Department.

Investigations revealed that NextG had placed attachments on the poles in direct contradiction to the safety directives that had specifically denied it permission to do so.

In a settlement agreement with the California Utilities Commission in 2013, NextG agreed to pay $8.5 million into California’s general fund, and another $6 million to have 60,000 telephone poles inspected.

AT&T, Sprint and Verizon had previously agreed to pay $4 million each to resolve issues relating to the fire. The carriers had ownership in the poles along with NextG and Southern California Edison.

Mobilitie’s FCC request for intervention uses deception
“In its quest for unfettered access to the PROWs, the Petitioner attempts to equate wireless commercial broadband services to the ‘essential services’ of a regulated public utility. The Petitioner additionally asserts its need for FCC action to further the congressional mandate for FirstNet. However, Mobilitie’s requests for FCC intervention are subterfuges,” Present commented.

She states that in Montgomery County, the recent spike in applications submitted by Mobilitie, Crown Castle, and their wireless carrier tenants are “creaming” or “cherry picking” select geographic areas to provide enhanced wireless broadband coverage, while at the same time failing to provide even minimal levels of wireless broadband service to other geographic areas in the County.

“Nothing either in the publicly available applications that have been recently submitted by these hosts and their tenant carriers or in the hosts’ franchise agreements with the County to occupy the PROWs suggests any interest or plans to meet the basic standard of a state regulated utility to serve all consumers in their service territory,” Present said.

“Mobilitie also does not demonstrate to the FCC that its commercial wireless broadband service is either provided or contemplated to serve residential consumers throughout all its service territories. Obviously, wireless broadband service does not rise to the caliber of an ‘essential public service,’ otherwise the Petitioner and its industry would be ensuring that all consumers in their service territories were equipped with adequate coverage,” she said.

DAS provider still continues to shed its name
In June, according to an article in The Wall Street Journal, Mobilitie CEO Gary Jabara said the company is registered under different names to make it easier for local officials to understand the status of his firm.

However, he said that in the future, the company will most often use the name “Mobilitie” in dealings with local officials.

Present informed Wireless Estimator that the company is doing just the opposite in Maryland.

She said that Mobilitie has been registered as Mobilitie Management, LLC, but recently requested to change its name to Technology MD Network Company.

Ten-year concern was sparked by one tower siting
Present became concerned about tower siting ten years ago when T-Mobile wanted to erect a cell tower at Cresthaven Elementary School in Silver Springs.

Although Present has a bachelor’s degree in consumer science, housing, and a master’s degree in public administration, her first avocation was to be an architect, and she enjoyed reading engineering plans.

She noticed that the Cresthaven site did not meet setback requirements and presenting that and other information at a public hearing, and after appeals, T-Mobile eventually abandoned their plans for the monopole.

“It was a steep learning curve for me, but I’ve tried to share my knowledge with other communities,” Present said.

Present used to work for a small Maryland municipality in a department that oversaw zoning enforcement.

She has been a consultant for strategies, analyses and research to communities and consumers on housing, land use and consumer protection.

After a number of state and municipal associations jointly filed for a 30-day extension to provide comments and reply comments, the WTB extended those dates last week to March 8, 2017 and April 7, 2017.

CTIA addresses the issue with a lengthy study
CTIA has been the only association to date that has filed comments in the WT Docket No. 16-421 request.

Construction to benefit by $93 billion over seven years
Accenture said that telecom operators are expected to invest approximately $275 billion over seven years to deploy next-generation wireless technology, with trials beginning as early as 2017 in select cities. Of that $275 billion, $93 billion is expected to be spent on construction, with the remainder being allocated for network equipment, engineering, and planning.

The report stated that currently, applications for small-cell implementations can take up to 18 to 24 months for approval, which is similar to the time required to approve one large macro cell tower.

However, Accenture did not identify the percentage of the nation’s municipalities that fall within that timeframe or statistics on how many approve applications in a respectable amount of time if the requested information is complete.

Recognizing that the density of small cells is up to 100 times greater than for macro towers, such an approval cycle will pose a tremendous challenge to both telecom operators and municipalities, Accenture said.

“In certain cases, slow turnaround/approval times have not only caused delay, but have resulted in approval of only part of the submitted plan. If approval for a full cluster of small cells is not supported, and fewer small cells are deployed as a result, the full benefits of this wireless technology will not be realized,” the report noted.