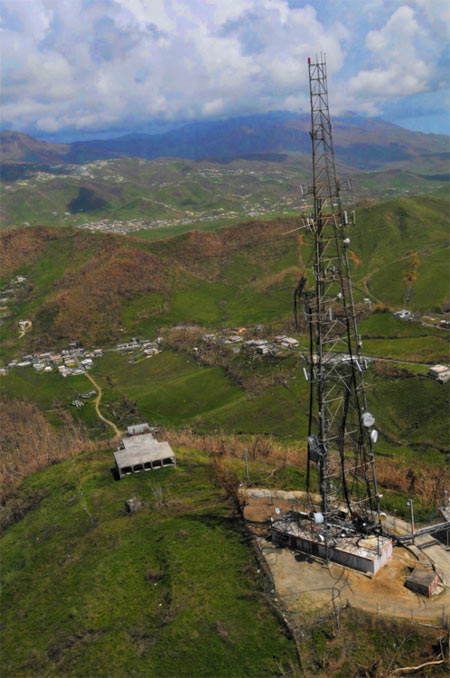 According to Spc. Gabrielle Weaver, the team assessed several towers via helicopter in an effort to reestablish communication to the island.

They are trying to make a list of which one is more damaged so they can go to it first, said Capt. Sean M. White, the JFLCC communications representative in Puerto Rico. The team is there to support FEMA in their mission to reestablish communications.

The team spent several hours flying around the island taking notes and photographs for FEMA to prioritize which towers need the most repair. The goal is to reestablish communications for emergency personnel, Weaver said.

The primary sites that serve police, fire and emergency medical services will be repaired first, said Keith Pratt, the FEMA Communication Task Force chief of staff. Towers that primarily provide communication services to the general public are next in priority.

The information that is gathered from the mission will be sent to engineers who will determine which towers are to be repaired first and how long it will take to get each tower back online, according to Weaver.

“They will determine a restoration plan and work with the vendors and industry to get these back online,” said Pratt. “I have insufficient data to provide a timeline but I would say it is going to be a long period of time before everything is completely restored.”

The results of the assessment will give JLFCC an idea as how much support FEMA will need to get the towers restored.

“Depending on the severity of the damage to the towers, it might lead them to other missions to determine which of the other towers are unusable,” said White. “If FEMA cannot source that themselves, we will leverage any asset that foots that bill.”