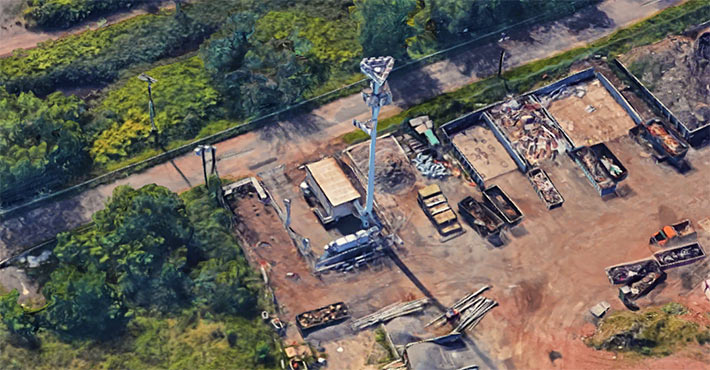 The AT&T cell tower is located on property located in Elizabeth, N.J.

The nation’s most profitable toll road, exceeding over $1 billion annually in revenue, will be slightly less profitable following a New Jersey tax court decision handed down last Friday that will require it to pay city taxes on a cell tower on its property in Elizabeth.

The ruling could also have other municipalities assess whether towers located on turnpike property along its 122-mile stretch are exempt from local taxes as the New Jersey Turnpike Authority (NJTA) unsuccessfully argued in court.

In addition, the ruling could have wide-ranging implications for toll roads operating in other states.

The Elizabeth tower was erected by a predecessor of AT&T and is owned by the NJTA and leased back to AT&T.

The NJTA filed complaints challenging the 2014 and 2015 tax year assessments, stating that the tower is “exempt from real property taxation” as a NJTA “Turnpike project” and “communication facility”.

In court documents, the NJTA contends that it “has the right to use” the cell tower for “its own purposes and in furtherance of an essential Authority function.”

In its ruling the court noted that in considering the grant of a tax exemption, “our Legislature ‘must base tax exemptions on the property’s use, not the owner’s identity’.”

Elizabeth’s counsel argued that the NJTA had not offered any evidence that the cell tower furnishes a vital public service that has been statutorily entrusted to the NJTA. Instead, they contend that operation and maintenance of the cell tower benefits only AT&T’s private clients and subscribers.

According to testimony, the NJTA did not have any communications equipment on the monopole.

Attorneys for Elizabeth said the primary purpose of the NJTA is transportation and not communication, and that “[cellular] telephone communication was not even invented when the Turnpike was authorized.”

The court said that although there were no cell service opportunities when the guiding Turnpike Authority Act became law 69 years ago, “it is likely that our Legislature viewed communications facilities as buildings or structures that provide a means or medium of communication, which thereby ‘facilitate vehicular traffic’ and ‘remove the present handicaps and hazards on the congested highways’.”

The court concluded that the NJTA did not make actual use of the cell tower for New Jersey Turnpike purposes during the tax years at issue.

In its ruling, the court said, “Unfortunately, the record before the court fails to disclose how many other cellular communications facilities serve plaintiff’s roadways or where those cellular communication apparatuses are located. Further, the record is devoid of any evidence that the cell tower at issue in these matters serves any portion of the New Jersey Turnpike roadway, or is in some way essential or instrumental to plaintiff furnishing safe passage or travel along portions of the New Jersey Turnpike.”

“The absence of this relevant and probative information raises concern about whether the cell tower is simply advancing AT&T’s private business plan or is furthering plaintiff’s statutory mandate to furnish essential public services,” Judge Joshua Novin wrote in his order declaring the property was not tax exempt.

It is not known whether the NJTA’s master agreement with AT&T allows the authority to pass on the increased taxes to the carrier, as well as whether the authority will install intra-agency communications using multiple towers erected on NJTA property, in an attempt to persuade the courts that the structures are facilitating vehicular traffic and safety.

The litmus test would be whether the property is being utilized in furtherance of the agency’s statutory mandate.

In September, a number of residents of Hillsdale were disappointed when the NJTA confirmed that AT&T will move forward with their intent to replace an existing monopole at mile post 168.2 on the GSP within the parkway’s center median with an 85-foot monopole at the Hillsdale Avenue Bridge on GSP property.