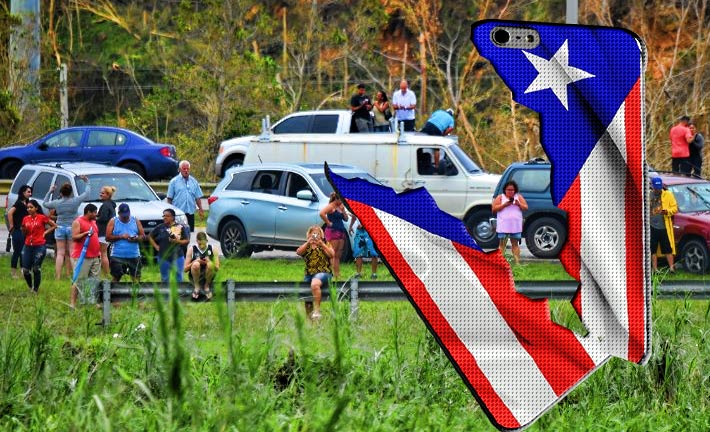 Puerto Rico’s residents will spend hours alongside highways to see if they can catch elusive connections.

Puerto Rico’s cell service is still devastated today with over 91% of its sites out of service, basically the same as yesterday. The horrific outages caused by Hurricane Maria are also being felt in the U.S. Virgin Islands where 60.4% of cell sites are out of service, slightly down from yesterday’s 61.3%.

In San Juan, P.R., subscribers saw a poor, but the best increase of service on the island with 283 cell sites out of 364 down, representing 77% of the sites out of service. 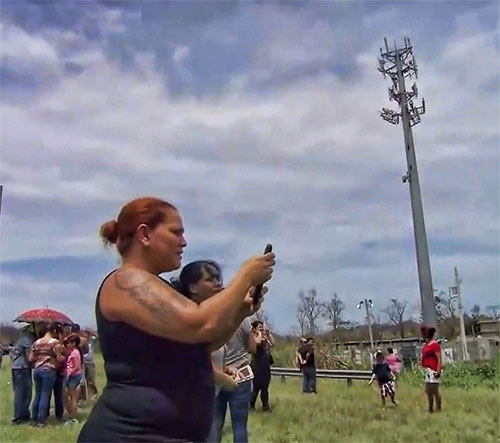 Pretzel-like antenna arrays and no backup power has residents struggling to get cell service in most areas of Puerto Rico.

Although the San Juan area has the best coverage, over 34 out of 78 counties have 100% of their cell sites out of service.

Whereas the majority of Hurricane Irma’s out of service cell sites were a result of power resupply issues, Hurricane Maria’s high winds have most likely caused equipment failures on the island.

Two contractors that provide telecom services in Puerto Rico informed Wireless Estimator that carrier cell sites are not nearly as hardened as those in the U.S. and in addition to power supply problems they have structural issues.

Also, the electrical grid is expected to be down for many months and adequate UPS systems are not available.

Over 3 million citizens remain without power, but it’s not because Puerto Rico’s power plants were destroyed, it’s a result of over 80 percent of the transmission lines being down.

Although federal funding will have to assist in funding the rebuild since the Puerto Rico Electric Power Authority (PREPA) is bankrupt, it will also have to reconstruct a communications systems for the authority.

A number of PREPA’s tower sites are down because they weren’t adequately designed to code.

“I can show you that their backhaul mounts were cobbled together with fence pipe by contractors that wanted to save a few dollars,” said one construction manager. “PREPA inspectors ignored it when they examined the installations.”

As carriers bring in generators and resupply existing ones, they’re also going to have to provide security at many sites. 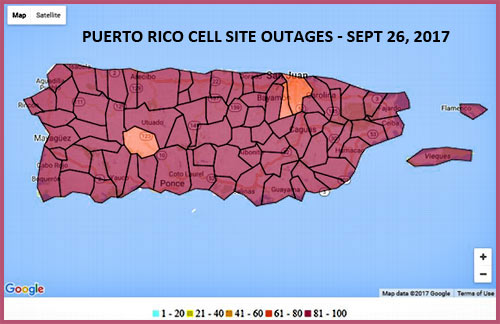 To combat looting of fuel and generators, armed guards are going to be necessary at many cell sites as residents become desperate for power.

They damaged the automatic transfer switch during the theft, but a generator was put in place and it is currently working, but local citizens are guarding the site until authorities have the available resources.

“The devastation is vast,” Puerto Rico Gov. Ricardo Rossello said in a statement today. “Make no mistake — this is a humanitarian disaster involving 3.4 million U.S. citizens.”

Many communities have been isolated from the outside world for days, relying only on radios for news.  Without cell service, the full extent of the crisis has not been assessed.

T-Mobile said it reached a deal with other carriers to help reconnect their customers, saying callers should use the roaming data option to find a connection. Officials said customers would not be charged extra.

Claro was installing 40 generators to power up its towers, and expected 50 more generators to arrive from the Dominican Republic that would be quickly put in place.

AT&T set up a website that will allow anyone stateside (no matter the carrier) register a cell phone number of a friend or family member who is an AT&T customer in Puerto Rico.

And, when that phone number connects to the network in Puerto Rico, the customer will be notified that their friends and family are looking for them.  Users will also receive an email.

“We are committed to the restoration and recovery efforts for the people of Puerto Rico. With this website, we are helping them reach family and friends in the U.S. as services restore,” AT&T Communications CEO John Donovan said. “Critical help has been arriving this weekend and more is on the way.”