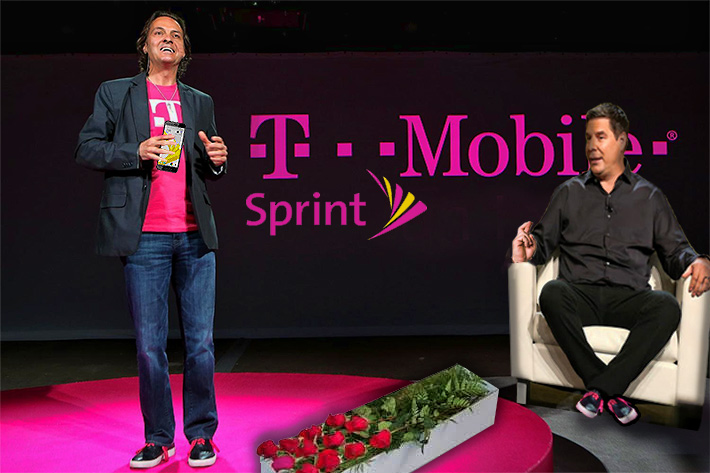 Although Sprint CEO Marcelo Claure, at right, is wishful that the second proposal will be successful, it is likely that T-Mobile CEO John Legere will continue to hold the reins of the combined company due to his excellent subscriber growth record.

In February, Reuters broke the news that Deutsche Telekom subsidiary T-Mobile U.S. was reportedly planning a renewed bid to acquire rival Sprint after a previous reverse attempt was thwarted by regulators.  Joined by CNBC, Reuters is again reporting that the romance has fired up again and a deal could be expected by the end of next month. But it’s not going to be a 50/50 marriage.

CNBC reported earlier this morning that T-Mobile is close to inking a deal to merge with Japan’s SoftBank, which controls Sprint.

Sprint will own 40 to 50 percent of the combined company and T-Mobile would emerge as the majority owner, according to their sources.

Upon completion of the merger it would create a business with more than 130 million subscribers, behind Verizon Communications and AT&T.

Sprint has a market capitalization of $32 billion; T-Mobile’s is $52 billion.

The merger would require regulatory scrutiny since it would reduce the industry to three key players. There would be concern by authorities that the future of unlimited plans would be curtailed by Sprint and T-Mobile and if that were the case it could cause a domino effect and other carriers would follow suit.

It is likely that T-Mobile CEO John Legere would lead the company since under his leadership T-Mobile has outperformed Sprint under the guidance of CEO Marcelo Claure.

SoftBank founder Masayoshi Son abandoned an earlier attempt to acquire T-Mobile for Sprint in 2014 amid opposition from antitrust regulators concerned that consumers could lose out.

There had been rumors that Sprint might end up merging with other companies such as Comcast and Charter.