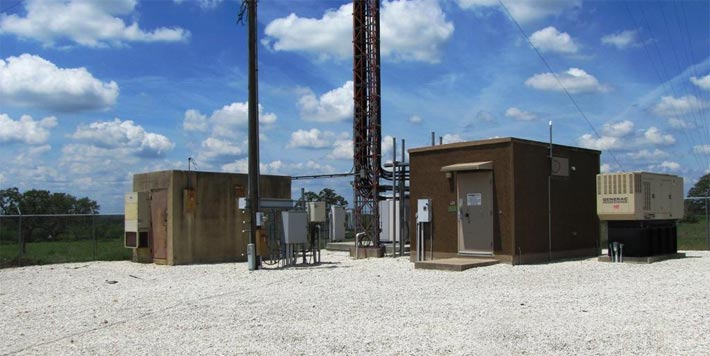 The technician reportedly was injured when he used a guy wire to descend the American Tower structure in Cuero, Tex.

Update: July 11, 2017 – According to reliable sources, the company that the injured worker was employed by was Advanced Data Technology of Pearsall, Tex. Established in 1995, Advanced Data is a systems integrator of  voice, data, and video solutions in rural markets. The company did not respond to a request for additional information regarding the incident. The injured technician has been released from the hospital.

July 8, 2017 – A tower tech is reported to be in stable condition and is expected to be released from a hospital tomorrow after reportedly using a guy wire to descend from his work station on an American Tower Corp. 300-foot guyed tower off of Highway 183 in Cuero, Tex.

The incident happened at about 3:15 p.m. yesterday, according to DeWitt County Sheriff Carl Bowen.

Multiple press reports said that a contract worker for AT&T was working at around 200 feet and began to descend due to rain and lightning moving in when he lost his grip and fell.

However, according to a source knowledgeable of the incident, it was not an AT&T contract worker, but a technician self-performing work on the tower for another company – and he did not fall.

Also, the tower had been incorrectly identified as an American Tower-owned AT&T Long Lines self-supporting structure just west of the accident site.

Cuero EMS transported the victim to the Cuero airport where Methodist Air Care transported him to SAMC.

The technician was reported to be in stable condition but was complaining of dizziness and blurred vision to EMS personnel, according the Sheriff’s Department in a news report.

“Just when you think you’ve heard it all, something like this just amazes you,” said a safety executive upon learning of the reported basis for the technician’s injuries.