With President Donald Trump’s “America’s Infrastructure First” policy calling for $1 trillion in new investment to improve the nation’s infrastructure, broadband will play a critical role in connecting the country’s citizens, communities and businesses, and according to an all-star panel brought together by USTelecom that spoke before the National Press Club in Washington yesterday, that need will most likely require $20 billion to fund it.

That was the general consensus amongst seven speakers that presented their views as to the best way to invest in America’s infrastructure in a session led by USTelecom President and CEO Jonathan Spalter who said, “The President is pledging very boldly to invest upwards of a trillion dollars in a long-overdue upgrade of U.S. infrastructure. And the Democrats have come forward just this week with their own equally as ambitious plan.”

Broadband development handouts questioned
Mark Jamison, advisor to the Trump FCC transition team, said he was obligated by law not to discuss transition team matters, but under questioning by Spalter – stating that his comments were his own – he may have provided a glimpse of the future direction of the FCC. 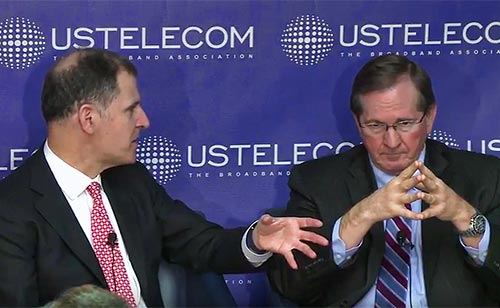 Mark Jamison (right), advisor to the Trump FCC transition team, ponders a question from USTelecom President and CEO Jonathan Spalter. Jamison said he was not in favor of broadband stimulus plans.

He was not particularly fond of the broadband stimulus program that allocated about $7.2 billion.

“I would not like to see us repeat that kind of a process,” he said.

“I think it’s reasonably well known that that was a very fast process of putting money in different people’s hands, and I won’t name names, but I spent a fair amount of time talking with one of the groups that got the money, and their mission, of course, was to build – and in this case it was middle mile – in places that were unserved. But their geographic map included some spaces that were already served. And they kind of smirked and said that’s where the valuable customers are and we’re going to go after them, even though somebody else is already serving them.”

“Something we also learned from that,” said Jamison,” is that when the allocation of the money can be politically driven, it will be. When you look at statistics, the money went largely to states where there were Democratic governors and to areas where they had a powerful Republican or Democrat in congress. That’s where most of the money went, I don’t think we want to repeat that.”

Panelist Kathleen Abenathy, a former FCC Commissioner nominated to the position by President George W. Bush, and a former senior executive with Frontier Communications, said that she also believes that there are alternatives such as tax credits or depreciation, and other investment incentives.

“Those are vehicles that I like because you don’t have to have a government process for handing out money and who it goes to,” said Abernathy.

This was Spalter’s first major presentation as USTelecom’s President and CEO, being appointed to the position this month.

The seasoned interviewer and veteran in the private communications sector, also served as the Associate Director of the United States Information Agency and managed the agency’s global technology resources as Chief Information Officer.

During his opening statement, Spalter said, “Many believe a major push on infrastructure holds out the greatest hope for meaningful bipartisan progress in our country. And it’s essential that this push includes broadband. Shoring up aging brick and mortar infrastructure clearly is essential for maintaining our country’s safety and economic vitality and health, but only by smartly connecting the dots between what really is a very large analog effort and U.S. digital infrastructure can we really achieve the national outcome that truly can be transformative for our country.”