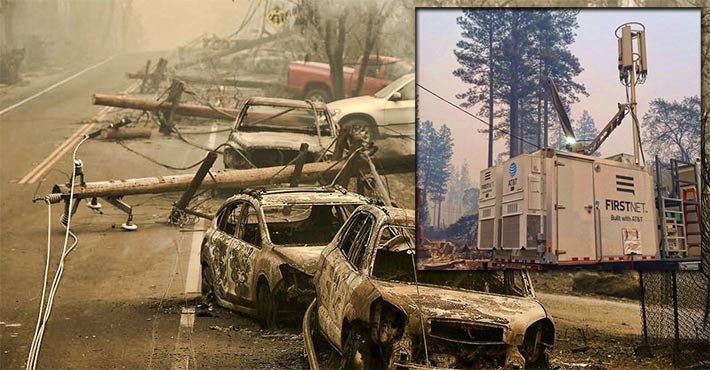 Forty-two people have died as a result of the wildfire in Northern California that wiped out the town of Paradise, making the Camp Fire the deadliest in state history. The death total is expected to rise since hundreds of residents are still unaccounted for.

Carriers were quick to provide cell service support since the area has lost a number of cell sites and higher than normal traffic is occurring due to the addition of more than 5,000 personnel that are fighting the blaze that has now burned 125,000 acres and destroyed more than 6,500 homes and 260 commercial buildings.

T-Mobile said last evening that they have made significant progress in restoring their network and will continue to make repairs as site access, air quality and fire conditions allow. In the Camp Fire area, they said a limited number of sites remain impacted due to power or third-party transport issues caused by the fires. However, all local evacuation centers are currently covered.

“As work to combat the ongoing fires in California continues, we remain committed to keeping our customers, FirstNet subscribers and public safety agencies connected. Our Network Disaster Recovery team has deployed six portable cell sites, or SatCOLTs (Cell on Light Trucks) to affected areas, including the Los Angeles Fire Command Camp and the Paradise Police Department,” the carrier said in a statement yesterday.

Verizon said on Monday they were “making great progress” with their network restoration. “We’ve implemented temporary backhaul solutions in much of the affected area,” the carrier said in a statement.

“Our network is almost fully restored in the fire impacted areas. We continue to work with the local fiber provider as they assess damage and begin repair work.”

Sprint has not provided any information regarding their restoration and assistance efforts, and only identified they will waive call, text and data overage fees for Sprint customers in the affected areas.

While the cause of the Camp Fire was being investigated, Pacific Gas & Electric (PG&E) drew scrutiny after telling state regulators that it had been having a problem with an electrical transmission line in the area before the fire broke out.

According to the Associated Press, a day before the Camp Fire, PG&E got in touch with Betsy Ann Cowley, saying they needed access to her property because their power lines were causing sparks.

The area where Cal Fire says the blaze started, and where PG&E says sparks were detected on Cowley’s property is roughly the same, according to an AP reporter at the site.

Prior to the Camp Fire, PG&E could already be on the hook for losses from deadly fires last year that could cost the utility as much as $17.32 billion in liabilities, according to a JPMorgan Chase & Co. estimate.

The company’s stock price dropped 17 percent yesterday to $32.98 a share. In early morning trading it was down another 3 percent.