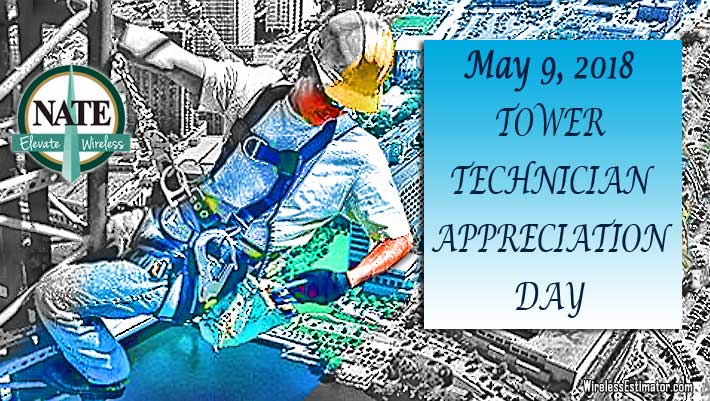 The National Association of Tower Erectors (NATE) today unveiled a commemoration declaring Wed., May 9, 2018 as Tower Technician Appreciation Day. For the second consecutive year, a day has been set aside by NATE to coincide with OSHA’s National Safety Stand-Down Week in order to pay tribute to the important work that tower technicians conduct on a daily basis to enable a mobile society.

“I’m glad to once again join NATE in congratulating and honoring all of the hardworking tower technicians who play a critical role in maintaining the communications infrastructure in South Dakota and across the country, said U.S. Senator John Thune (R-SD), who serves as Chairman of the U.S. Senate Committee on Commerce, Science and Transportation. “They don’t have an easy job, but thanks to their dedication and unique skill set, the United States is continuing to expand its wireless broadband footprint, and we’re in a much stronger position in the race toward 5G,” added Thune.

“NATE is ecstatic to declare Wed., May 9, 2018 as a day to honor our industry’s most precious resource, the tower technician workforce,” said NATE Chairman Jim Tracy from Burley, Washington. “Today’s skilled technicians are expected to possess the diverse skill set necessary to safely deploy and expand universal broadband, public safety communications and ubiquitous 5G coverage across North America, while repacking the broadcast spectrum. NATE is proud to highlight and salute these dedicated technicians who work tirelessly to meet both our present and future communications needs.”

NATE encourages member companies and industry stakeholders to use this day of commemoration to host events within their respective organizations to pay tribute to the technicians they employ. To download and print the official Tower Technician Appreciation Day Proclamation, visit HERE.

Whereas advances in wireless communications are changing the landscape and delivery models for industries as diverse as health care, financial services, public and private media, higher education, agriculture, energy, entertainment, sports, transportation, utilities, public safety, government and the military; and

Whereas tower technicians have been uniquely responsible for developing and maintaining every generation of communications networks and their work is of critical importance to the nation’s homeland security, competitiveness and vital communications capabilities; and

Whereas tower technicians will be helping to achieve the national goal of expanding broadband, particularly in rural or underserved areas of the United States; and

Whereas tower technicians play an instrumental role in restoring networks and related communications infrastructure in the aftermath of natural disasters and weather catastrophes; and

Whereas tower technicians are the “zero responders” whom are called upon by 911 and public safety entities when emergency communication networks need to be restored, and will be called upon to support the deployment of FirstNet, the country’s first nationwide, interoperable broadband network devoted exclusively to public safety that will ultimately help save lives and provide law enforcement officials, fire fighters and EMS personnel with the critical communications capabilities and resources they need to respond to emergency situations; and

Whereas tower technicians are performing essential tower work resulting from the broadcast repack by safely deploying thousands of new antennas and wireless equipment on broadcast and cellular communications structures located across the United States; and

Whereas tower technicians also are helping to advance the deployment of Distributed Antenna Systems (DAS) and small cells, which are critical in densifying network coverage to accommodate large volumes of data traffic in urban environments, stadiums, airports, shopping malls and in other populated areas; and

Whereas the efforts, expertise and diligence of tower technicians will be essential to deliver next generation networks and technologies vital for the continued growth of Smart Cities, the Internet of Things, Automated Vehicles and ultimately, propel the nation to win the global race to 5G; and

Whereas the National Association of Tower Erectors (NATE) is the organization that is committed to providing the safety resources, standards and best practices to ensure tower technicians perform work safely and in a quality manner, while collaborating with key federal agencies in furtherance of these goals; and

Whereas the Occupational Health & Safety Administration (OSHA) has declared a National Safety Stand-Down the week of May 7-11, 2018 to raise awareness among employers and workers about the hazards of falls and the importance of stressing safety;

Now, therefore, be it resolved that the National Association of Tower Erectors hereby declares Wednesday, May 9, 2018 as Tower Technician Appreciation Day to honor the men and women who deploy and maintain America’s communications infrastructure.