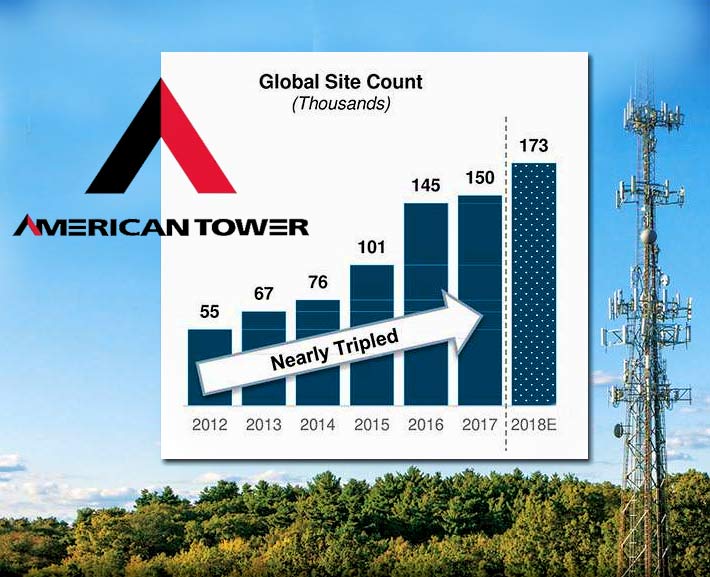 “Based on the mobile operators’ recent public statements, the aggregate U.S. carrier capex should be in the $30 billion plus range in 2018, a level which supports robust organic tenant billings growth for our business.”

Taiclet said with all four national carriers in the U.S. offering unlimited data plans and with increasing mobile video consumption among consumers, “we can also expect another year of at least 30% aggregate data growth in the U.S., all of which places further demands on wireless networks. And with the announced deployment plans for the FirstNet public safety network, a mid-band spectrum build-out expected in the 2.5 gigahertz band, and the potential launch of low-band 5G coverage projects, we expect tenant organic billings growth of over 6% this year in the United States.”

He said that during the past five years, ATC invested nearly $20 billion to acquire and construct communications structures with approximately 60% of it spent in the U.S.

Taiclet also highlighted achieving and surpassing its strategic plan of having 100,000 towers and small cell systems by the end of 2017.

On Monday, SBA CFO Brendan Cavanagh informed analysts that the company’s initial outlook for full-year 2018 “reflects anticipated growth in both our leasing and services businesses. We anticipate a meaningful increase in domestic operational leasing activity in 2018 over 2017, driven largely by incremental activity from Sprint, and the ramp up of FirstNet related activity with AT&T.”

He said that combined with steady contributions from T-Mobile and Verizon, SBA expects to see domestic leasing activity in the form of new lease and amendment signings build throughout the year.