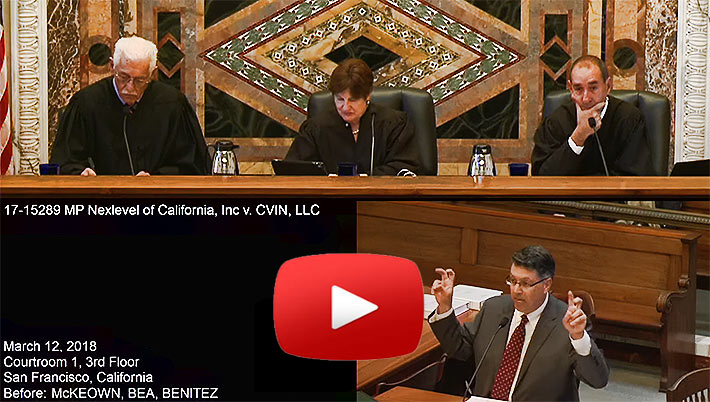 Oral arguments were held March 12, 2018. The justices made their decision in favor of MP Nexlevel last week.

License only becomes a concern in a ploy to not pay for millions of dollars of work, plaintiff says

UPDATE: October 26, 2018 – MP Nexlevel of California, Inc., and defendant and counter and cross-claimant CVIN, LLC, dba Vast Networks, filed a stipulation to dismiss the entire action with prejudice. In light of the stipulation, and the previous dismissal of claims against all other defendants, cross-claimants, counter-claimants, and third-party claimants, the U.S. District Court of the Eastern District of California dismissed the case with prejudice.

July 18, 2018 – The Ninth Circuit Court of Appeals last week restored a telecommunications contractor’s lawsuit seeking $18.1 million for work performed in support of a 1,371-mile fiber-optic cable network installation project in California, reversing a lower court’s verdict that installing underground conduit was not covered under the scope of the company’s specialty license, and California law states a contractor who performs unlicensed work is not entitled to recover payment for that work.

The lawsuit is being carefully watched by California’s 4,882  low-voltage specialty contractors as well as contractors in other states that have similar license scopes that they use for trenching and burying underground conduit for their clients. 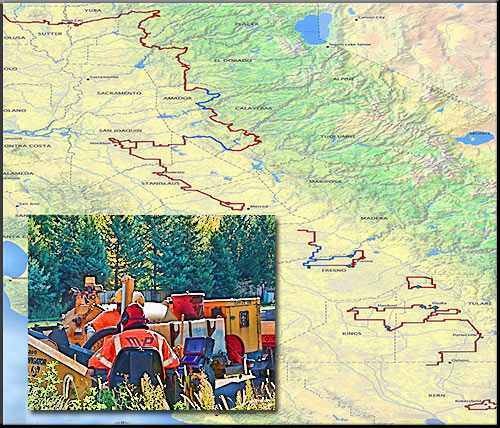 In a report to the NTIA, CVIN said they were delayed in the project of providing fiber (in red, above) to California’s Central Valley due to delays in acquiring construction permits. The company also said its high middle mile fiber cost of $83,635 per mile was due to “construction challenges associated with rocky terrain”. It also attempted to blame its contractor for the delays.

According to the original breach of contract complaint filed in 2014 by MP Nexlevel of California, Inc. (MP), a turnkey contractor that provides small cell and macro cell installations along with other industry and underground services, the Minnesota-based company contracted with CVIN, LLC, dba Vast Networks to provide installation services for a large-scale broadband project through the Central Valley of California.

CVIN is a joint enterprise comprised of affiliates of several independent telephone companies intent upon deploying a fiber backbone network in 18 counties, according to the complaint, and they anticipated that the $66.6 million cost of the project would be covered mostly by grants.

Inaccurate engineering studies, surveys alleged
In 2011, MP entered into an agreement with CVIN to offer plowing, trenching and boring-related services, but MP said once it became entrenched in the project it found that CVIN had insufficient capital to complete the project and it rushed through the process of applying for the National Telecommunications and Information Administration Grant without sufficient inquiries into whether their cost calculations and engineering studies were accurate.

MP said that they were provided with inaccurate surveys of existing utilities shown in the staking plans, and were not provided geotech studies which resulted in cost overruns that were also increased by CVIN’s not getting governmental agency approvals.

CVIN’s Dec. 15, 2014 last annual report to the National Telecommunications & Information Administration (NTIA) – the agency that administered a grant award of $46.6 million — identified that their cost per new middle mile fiber was $83,635 per mile. They said it was higher than their baseline plan “due to construction challenges associated with rocky terrain in northern mountainous segments”.

In previous reports, CVIN said the company “Experienced delays in acquiring FONSI [Findings Of No Significant Impact] and construction permits. Construction is focused on the placement of underground conduit. No middle mile fiber or last mile wireless has been installed.”

Change-in-plans (CIP) requests totaled more than $7.5 million and MP said that many of the CIPs and invoices were over one year old.

However, MP said that CVIN refused to add additional days to their project completion schedule for the added work that was being required.

Funding dries up, and MP demands payment
In March or April of 2013, CVIN CEO David Nelson, according to MP, informed them that the company had no more money for the project and he would have to go back to the board for additional funding.

On Jan. 15, 2016, MP served CVIN with a notice demanding security for payment of past due work. The following day, Nelson mailed via overnight delivery a notice that MP’s contract was being terminated.

In a counterclaim filed by CVIN on Feb. 28, 2016, the fiber consortium now operational under Vast Networks,  alleged MP “utterly failed to properly install the conduit and in so doing, violated the contract plans and specifications and materially breached each contract and was negligent.”

CVIN said that the damage was substantial and the extent of which was still be assessed, but they were seeking compensation from MP’s performance bond provider.

They also said MP breached the contract through “defective” workmanship and they failed “to comply with the State of California’s Contractor’s Licensing Law, which requires that a contractor be duly licensed at all times from submitting a proposal to completing the work.”

Owner’s novel approach: return all previous payments
CVIN then made a novel and precedent-setting legal claim, submitting that MP only had a low-voltage C-7 California contractor’s license that wasn’t appropriate for the work that they had completed, therefore enriching them illegally and they would be required by California law to return all project payments they received back to CVIN which totaled $7.1 million.

MP argued that the C-7 Low-Voltage Systems license allowed them to install cable which does not exceed 91 volts.

Although there was no dispute that the fiber optic cable did not exceed 91 volts, and the parties disputed whether the project qualifies as a “communication system” and whether MP’s work constituted the installation of a communication system, U.S. Chief District Judge Lawrence O’Neill ruled that the means by which MP performed its work – namely, trenching and horizontal directional drilling (HDD)/boring – was outside the scope of its C-7 license, and was in conflict with a CalTrans requirement that a Class A or C-34 license was required for HDD work.

MP argued that if its work was not covered by its C-7 license, it was permissible as “incidental and supplemental” to covered work because “all work performed by MP, had the sole and exclusive purpose of installing a communications system.”

MP cited California code that states: “Nothing contained in this section shall prohibit a specialty contractor from taking and executing a contract involving the use of two or more crafts or trades, if the performance of the work in the crafts or trades, other than in which he or she is licensed, is incidental and supplemental to the performance of the work in the craft for which the specialty contractor is licensed.”

Judge finds incidental analogy “absurd”
O’Neill said MP’s analogy would lead to “absurd results,” taking it to the extreme by presuming a C-7 license holder would likewise be permitted to build a home, so that, when complete, the contractor could install a satellite dish on top of it. However, he failed to acknowledge that once a trench is opened and the conduit is placed, it is backfilled and ceases to exist as a supporting entity such as a house, a point argued by MP’s attorney during the appellate hearing.

O’Neill denied MPs motion for summary judgment on July 19, 2016, and later dismissed all remaining causes of action between MP and  CVIN, opening up the opportunity for CVIN to reclaim in a motion, collecting the $7.1 million that was paid to MP.

In his ruling, O’Neill said the C-7 work was limited to “the placement of equipment in, on, and around buildings,” conflicting with the statutory definition that does not contain any specific limitations on where the systems to which the license applies can be installed, and  many telephone systems are commonly installed outside of buildings.

Contracting official  disagrees with the ruling
Before the ruling, MP presented to O’Neill an affidavit from Robert Berrigan, a long-time employee of the California Contractors State License Board (CSLB) and the author of a number of statutes which the Court had been asked to interpret,

Berrigan testified that the CSLB had always interpreted the C-7 license statute to include the work performed by MP. He also said that any work done by MP that was arguably outside its license would fall within the “supplemental and incidental” exception.

Appeals court reverses the lower court’s decision
MP took the decision to the Court of Appeals for the Ninth Circuit, offering that as of January of 2015, there were 4,882 C-7 licensed contractors in California, and O’Neill’s order “is now the only precedent available to define the scope of the license, and the Order includes two limitations that are not immediately apparent from the test of the statute itself: that a C-7 license does not allow the contractor to install telecommunications systems via trenching or boring, and that a C-7 license is limited to the installation of telecommunications systems in existing buildings.”

On July 10, the three-member court disagreed with Judge O’Neill’s decision and it was reversed and will be tried or dealt with again. MP is asking for a jury trial that is expected to take 40 days.

Wyoming requires a statewide license for a low-voltage contractor, which allows electrical installations of fewer than 90 volts for communication systems.

The National Electrical Code (NEC) defines low voltage systems as those that run off of between zero and 49 volts; however, state and local jurisdictions may modify this definition such as Tennessee which is less than 70 volts.