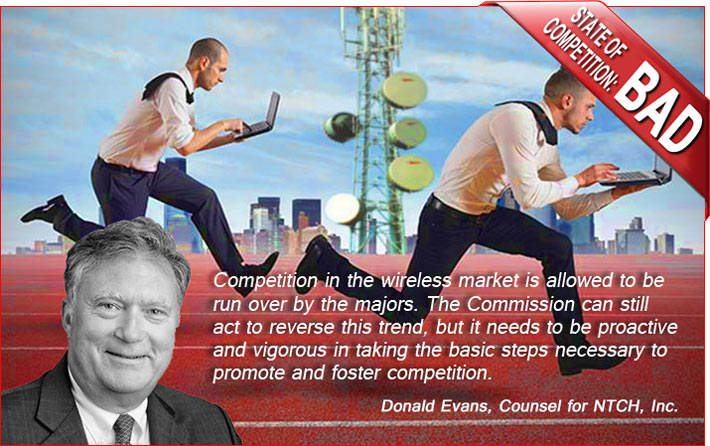 Former wireless provider NTCH’s counsel, Donald Evans, says competition is not alive and well, as claimed by AT&T and Verizon. NTCH believes that Verizon’s roaming rates are onerous and have been detrimental to the success of localized carriers.

AT&T, in replying to the FCC’s request for comments as to the state of mobile wireless competition, informed the FCC in a filing that the answer is a slam dunk for the agency since the Commission “has the easiest call it has ever had to make…the wireless marketplace is, quite obviously, ‘effectively competitive’.”

The carrier also said, “Competition has never been greater than it has been over the past two years, and as a result prices are at all-time lows, output is at all-time highs, and innovation, network quality, and consumer satisfaction are at unprecedented levels.”

Verizon, who joined other commenters in providing their eleventh-hour submission on the last day of filing, July 26, so that their statements couldn’t be easily refuted, carboned AT&T’s enthusiasm by discussing exploding demand/usage, falling prices, innovative offerings and robust investment.

But not everyone filing their comments painted as rosy a picture.

In its 45-page filing on the topic, the Competitive Carriers Association (CCA) cautioned the FCC that it should ensure that public safety buildout and rules do not stifle competition.

“The Commission should ensure that the FirstNet award to AT&T and the corresponding network build of the first National Public Safety Broadband Network (“NPSBN”) do not stifle competition among carriers,” CCA said.

The trade group for the nation’s smaller wireless providers argued that the FCC should be concerned about two carriers owning almost three quarters of the market.

“CCA represents nearly 100 mobile carriers, yet by the end of 2017, AT&T and Verizon represented 70 percent of the market share of wireless subscriptions. The increasing market power of the duopoly poses substantial challenges to the viability of smaller carriers and the competitiveness of the mobile ecosystem. Yet these rural and regional carriers are key players in the expansion of mobile wireless service to underserved or unserved areas of the country,” CCA said.

Temporarily shuttered 20-year licensee wants changes
In its submission to the FCC, NTCH said it lamented the reduction in providers over the years and stated that competition in the wireless market has been “allowed to be run over by the majors”.

“As the number of carriers has diminished and the breadth of coverage by the major carriers has commensurately increased, the economic incentive for reasonable roaming rates between carriers has vanished,” NTCH said.

“A carrier’s own rates had to be reasonable if it wanted to roam on other carriers’ networks, and if any carrier was unreasonable, there were always alternatives. That ideal competitive scenario of a plethora of independent players interconnecting and roaming on each other based on reciprocal, competitively established rates is long gone. Because the major carriers now no longer need roaming to survive, they can charge other carriers whatever they wish with the comfort that they will rarely themselves have to pay inflated rates.”

In its filing, NTCH said the Commission has steadfastly refused to compel larger carriers to charge reasonable roaming rates, despite the directive found in Title II of the Act that rates be reasonable.

“The Commission’s consistent unwillingness to fulfil its basic job of ensuring that common carrier rates are just, reasonable and non-discriminatory represents a major failure of its administrative responsibilities,” NTCH said.

NTCH had previously challenged the Commission’s rules governing disputes over voice and data roaming rates and said that Verizon’s roaming rates were unreasonably discriminatory because they permitted MVNO Straight Talk to offer “predatory low rates to customers in competition with smaller carriers targeting the prepaid market”.

In their unsuccessful attempt before the D.C. U.S. Court of Appeals, NTCH had requested that Verizon should be required to charge NTCH “no more that it charges any other carrier for roaming services”.

NTCH’s counsel, Donald Evans of Fletcher, Heald & Hildreth, P.L.C., informed Wireless Estimator today that NTCH is no longer providing service, but they have retained their infrastructure to jump back in if the FCC ever makes roaming affordable for small carriers.

Other comments to the FCC were provided by CTIA and the Wireless Infrastructure Association.