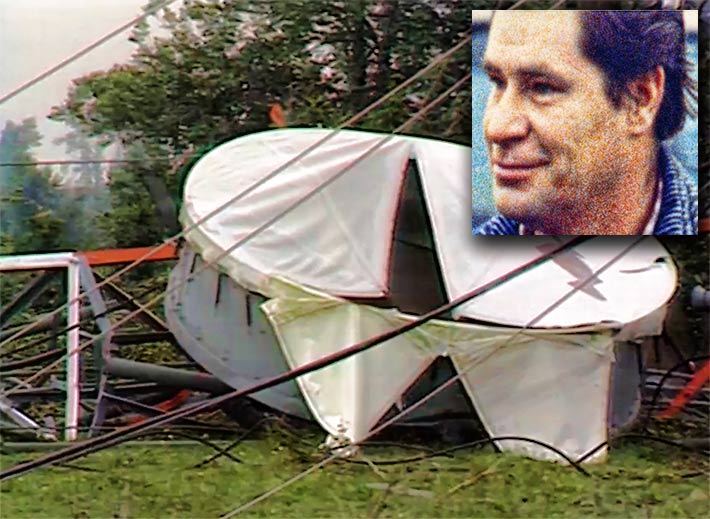 James “Jimmy” Wise was charged with murder and is expected to plead not guilty this afternoon. Wise, pictured above in 1987, was convicted for toppling a Bell Canada tower, but had the conviction stayed. Today, the frail 75-year-old is in a wheelchair after having suffered a stroke four years ago.

A 75-year-old Canadian man who was found guilty of collapsing an 1,100-foot Bell Canada guyed tower in Ottawa in 1987 and had his conviction stayed by Canada’s Supreme Court, is expected to plead not guilty today to a more serious charge – murder.

Last Thursday, Ontario Provincial Police (OPP) arrested James “Jimmy” Wise and charged him with first-degree murder in the death of a 59-year-old Ontario man, Raymond Collison, who disappeared in 2009.

But the long strange history of Wise being an alleged killer goes back to Aug. 15, 1987 when he toppled the tower.

OPP officers were then investigating Wise as a murder suspect in a string of five murders in Ottawa Valley where he lived, and obtained a warrant to search his home and vehicle, but had found nothing to link him to any of the homicides.

However, according to a court document, when the car was towed to the police station and while it was there, but after the warrant had expired, they installed a tracking device and continued to tail Wise.

On Aug. 15, 1987 they were able to use the tracker to watch the vehicle resembling Wise’s, but from a distance they didn’t know it wasn’t his vehicle.

About two hours into their stakeout, police heard a thunderous crash, unbeknownst to them at the time that it was the Bell Canada tower collapsing.

They then saw an identical vehicle, which was in fact Wise’s, pulling out of a nearby field.

When the car was vacuumed, melted pieces of metal, consistent with the metal guy wires of the communications tower that had been cut with a torch, were found.

The constant electronic surveillance was maintained until mid-November, when Wise was arrested and charged with vandalizing the tower in rural Williamsburg valued at $837,00 U.S., approximately $1.7 million today.

Wise would stand trial twice, being acquitted once and convicted once. Both verdicts would be vacated on appeal. Eventually, Justice James Chadwick stayed the case against Wise, ruling that a third trial would offend the principles of fundamental justice.

OPP Det.-Insp. Jim Gorry has been working on the Collison case for the past four years. He said Wise and Collison knew each other.

“Collison lived close to where Wise was living during his disappearance,” Gorry said in an interview with CBC.

Gorry would not reveal what police believe to have been the motive. He said police spent years gathering and analyzing evidence, and searched Wise’s home in November 2016.

“It’s a rather long process, especially when there’s a lot of information coming in,” Gorry said. “We interviewed a lot of people in this particular area.”

Wise first came to the public’s attention in 1987 when police strongly inferred during a press conference that he was the prime suspect in numerous unsolved murders.

Wise said his rights had been violated and his reputation irrevocably damaged.

In 1989, he sued the Crown and the OPP for over $1 million. The case was settled out of court in 2002 for an undisclosed amount of money. It is likely that the OPP has clear evidence that he allegedly committed this murder which is unrelated to the previous five he was being investigated for committing.