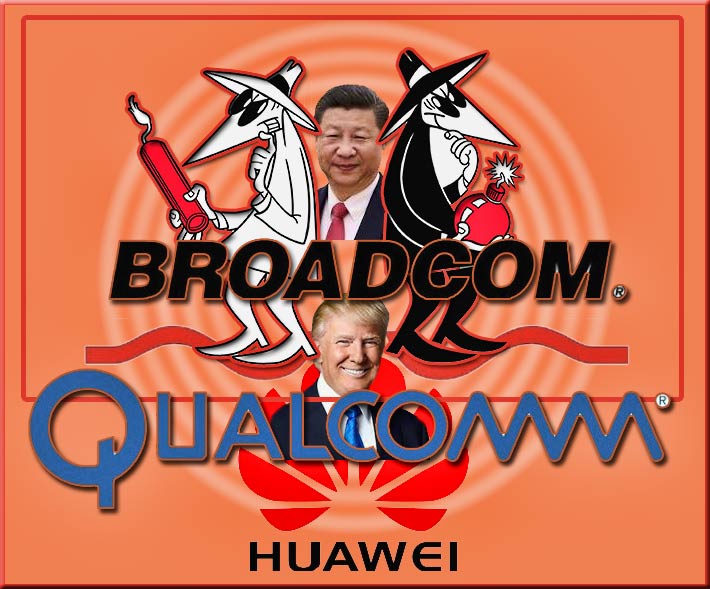 Department of Treasury officials believe that the acquisition could curtail Qualcomm’s R&D and Huawei – a security threat to the US – could see an increase in market share.

Broadcom Ltd. said it was disappointed as it withdrew its proposed candidates for the board at Qualcomm Inc., but assured in its announcement that the company would be moving its headquarters to the U.S.

March 13, 2018 – A hostile takeover of US chip-maker Qualcomm by its rival Broadcom was blocked by the White House on Monday because officials believe that there is “credible evidence that the deal would “impair the national security of the United States.”

Qualcomm and Broadcom, which announced that it is moving its headquarters from Singapore to the United States, are key developers of 5G broadband technology and earlier this month the US Treasury Department warned that since Broadcom was financing the $117 billion deal with over $100 billion in debt, it would be under significant pressure to squeeze additional earnings out of Qualcomm, possibly resulting in a significant reduction of 5G research and development.

In its statement, the Treasury argued that any setback to Qualcomm’s R&D of 5G technology could allow Chinese competitors like Huawei to gain ground.

In President Trump’s order yesterday he said the two companies must “immediately and permanently abandon the proposed takeover.”

Broadcom said in a statement following Trump’s announcement that it is reviewing the order and that it “strongly disagrees that its proposed acquisition of Qualcomm raises any national security concerns.”

In 2012, Congress released a scathing report on Huawei, accusing the company of having close links to Beijing, and it posed a threat to the country’s national security.

Following the report, then Sprint CEO Dan Hesse said his company would not use network equipment made by Huawei to comply with government concerns.

“Sprint is a big supplier to the U.S. government and that aside, I wouldn’t put in any equipment that would raise any security concerns,” Hesse said.

U.S. Commerce Secretary Gary Locke called Hesse in 2010 to express “deep concern” that Huawei might win a contract to upgrade the mobile-phone carrier’s network. After the call, Sprint awarded the work, worth as much as $5 billion, to other equipment manufacturers.

Officials from the CIA, FBI, NSA and the Defense Intelligence Agency testified in front of the Senate Intelligence Committee last month, stating that the Chinese smartphone makers posed a security threat to American customers.

Although Trump’s decision to raise import taxes on steel and aluminum, partly due to national defense demands concerns, has been stripped of credibility by many Republicans and Democrats since it’s a small percentage of military consumption, many of them are stating his decision to block the Broadcom-Qualcomm deal is defensible.