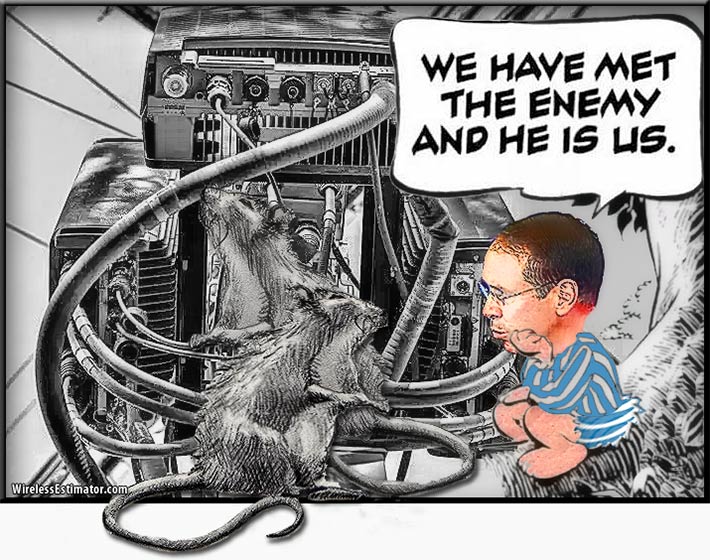 Dr. Michael Marcus, a former forceful proponent of new technology at the FCC for 20 years, who is recognized for getting the FCC to adopt rules for the 60 GHz mmWave bands in 1995, has taken AT&T to task for using a photograph of a small cell in Indianapolis in a Feb. 23 presentation to the FCC that he believes is an example of “needless messy small base station installation.” 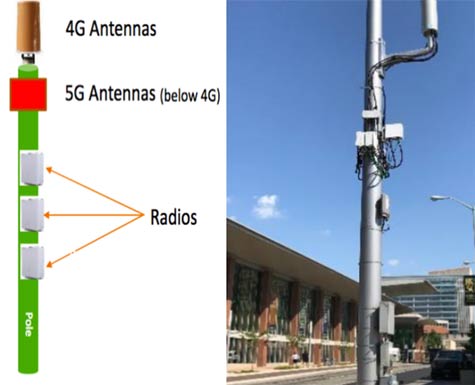 Although AT&T’s small cell design presentation (left) looks aesthetically pleasing, actual construction has a lot to be desired, according to Michael Marcus.

In a filing to the FCC, Marcus, a consultant for Marcus Spectrum Solutions LLC, said that he agrees with the Commission’s continuing focus on removing regulatory barriers to wireless investment and the local regulation is often overly burdensome.

However, in pointing out AT&T’s unsightly small cell, he said that the industry should recognize a “social contract with the neighbors of infrastructure such as small base stations,” as well as recognizing the saying of a 1970’s Walt Kelly Pogo cartoon, “We have met the enemy and he is us.”

In his submission to the Commission, Marcus identified AT&T’s modest clean design with radios vertically aligned, but in their Indianapolis installation the visual details show erratic mounting of multiple carriers and askew cables.

Although he believes that such details should not be the subject of FCC or local government regulation, he said he would like to see carriers taking ownership of the visual blight.

“More importantly, note the ‘rat’s nest’ of black cables connecting the radios to the antennas. While this is not shown in any of the other AT&T pictures in the filing, it is a real practice in the real world today as our previous filings have documented. Improving this mess of cables required attention, but does not necessarily require major cost increases,” said Marcus.

He also pointed out the need for labels indicating a point of contact for a small base stations.

“Most small base station equipment has no indication of ownership or responsible party either for the neighbors to report damage to it or to discuss its appearance. We suggest that it either become a voluntary industry practice or an FCC regulation that base stations without an FCC antenna registration have some contact information. This might be the carrier, the antenna contractor or a trade association,” Marcus suggested.

FCC Commissioner Carr sees the beautiful DASs, but not the beasts 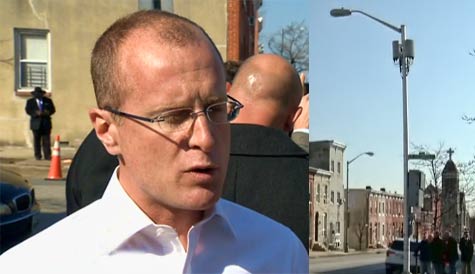 FCC Commissioner Brendan Carr viewed a number of Baltimore’s DAS installations yesterday, such as the one at right, but they were cherry-picked by T-Mobile and Crown Castle.

FCC Commissioner Brendan Carr was in Baltimore yesterday viewing small cell sites in the city in a carefully orchestrated presentation by Crown Castle and T-Mobile representatives. A light pole and other small cell installations he viewed during the media event were picture-perfect installations.

Carr informed reporters that “4G mobile has been marked by these large towers. We’re moving into 5G where 80% of the deployment for 5G are going to be these small cells.”

In a statement, Crown Castle said, “We’re seeking to enhance Baltimore’s existing wireless infrastructure by deploying a small cell network of low-powered antennas called “nodes” that sit close to the ground, are connected by fiber optic cable, and can handle large amounts of data at high speeds.  To date, 524 node locations have been constructed, supporting one, two and sometimes three wireless carrier tenants with another 583 locations planned.  Further, as Baltimore takes strides toward becoming a “smart city,” small cells can usher in next-generation networks such as 5G, which can in turn make innovations such as citywide data sharing and autonomous vehicles possible.”