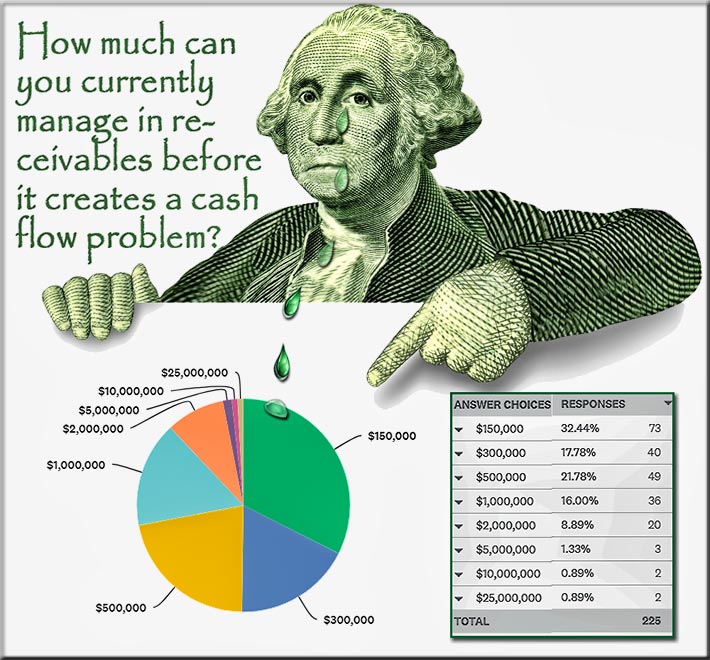 Commentary – Although we’re treated to almost a daily dose of news about how macro and small cell siting issue delays could adversely impact a successful 5G buildout in America, initial data from Wireless Estimator’s industry-supported Terms of Payment Survey indicates that carrier-generated cash flow problems of contractors could be 5G’s Achilles heel.

One-third of 225 vetted wireless contractors that have taken the confidential survey to date said that they could only handle $150,000 in receivables before they were in a cash flow vise.

With the average L&A project at $40,000, the effect upon cash flows of smaller contractors can be crippling when payments are delayed, especially in an industry that has mandated through model pricing that many Tier 2 contractors must struggle to hang onto a dwindling margin between 5 percent and 10 percent.

As an example, AT&T’s turfing contractors, according to the survey, average 60 days in payment terms, but that’s only after the work is completed, a video closeout has been successfully finished and any punch list items have been corrected – frequently adding another 30 days or more.

Then, contractors were informed this week by AT&T that no new invoicing will be allowed until October, a move most likely designed to shore up the carrier’s quarterly earnings, a ploy that T-Mobile also employs. Although the request violates contractors’ master service agreements, few if any will refuse to honor the dictate that will put payment of some projects into 100-day-plus payment terms.

Initial survey results identify that on average, 75 percent of all contractor revenues are from carrier projects.

According to a 2015 survey of 272 contractors undertaken by Wireless Estimator, more than 50% of the nation’s contractors performing elevated work had between 2 and 4 crews.

Diversification is a possibility for those companies seeking alternative revenues, but highly unlikely for most tower/small cell-centric construction and maintenance companies. Their asset investment isn’t transferable.

Outfitting a basic wireless crew cab with the proper test, construction, safety, and other equipment is between 200K and 250K. Other than the truck, the equipment isn’t usable for another industry.

Anecdotal news stories seldom prick the conscience of carriers whose sole focus is capex and opex, but data will provide an educational awareness that can be used by associations, the DoL, the FCC, and others to take action to ensure the survival of wireless contractors — if they’re sincere about America being the world’s leader in 5G.

You can assist by having your company take the confidential survey as 225 other concerned contractors have completed. It will close on Sept. 30, and the consolidated results will be made public for educational value to carriers, associations and lobbyists that can represent wireless contractors’ concerns.

In the past four months, largely due to the National Association of Tower Erectors’ outreach efforts, influential stakeholders representing government agencies and members of Congress have been educated regarding the prominent role that the wireless workforce plays in order to enable a connected, mobile society.

Combes informed the cell site crew, “You have in your hands the future of our company.”

The irony of that statement wasn’t lost on wireless contractors who could benefit from a payment shot clock that doesn’t reset on a carrier’s whim.