It is now expected that Hurricane Florence will hit the East Coast Thursday as a powerhouse Category 4 storm, and possibly a Category 5, and the damage could be extensive – and long-lasting, especially for cell towers.

Initial winds of up to 140 mph, according to the latest forecast from the National Hurricane Center, will test tower owners and carriers’ infrastructure in the Carolinas not only with power outages and antenna and line damage, but with the failure of structures.

The highest wind speed design in North Carolina is in Brunswick County which under Revision F is 100 mph and with Revision G the minimum basic wind speed at 120 mph and the maximum is 140 mph.

If the hurricane tracks further North to Virginia, Revision G design is 90 mph for both minimum and maximum wind speeds for almost all of the state’s counties.

Design for 90 mph doesn’t mean that structures that are not designed for 140 mph nominal design peak 3-second wind gust speeds will collapse, but it could stress them and present the possibility for failure. Also, antennas and lines are not designed to withstand catastrophic wind speeds.

Today, all of the major carriers have been promoting their efforts to harden their cell sites with generators that can be easily mobilized, as well as marshaling cells on wheels and cells on wings.

But Florence may test the structure itself, and no matter what wind speeds were required for the tower’s design, as a structural engineer informed Wireless Estimator this afternoon, “You can’t design for the flat plate loading of a mobile home or a Wawa sign.”

Hurricane Florence is also expected to develop tornadoes that will severely twist and collapse a structure no matter what code it was designed for.

Although the TIA-222-G was published in 2005 with two revisions which requires new sites and retrofits to withstand greater wind load influences, the largest changes since 1986, there are a number of legacy sites within the Carolinas and Virginia built to earlier revisions.

Wireless Estimator is requesting its readers to send in their wireless infrastructure-related storm damage and restoration pictures to info@wirelessestimator.com 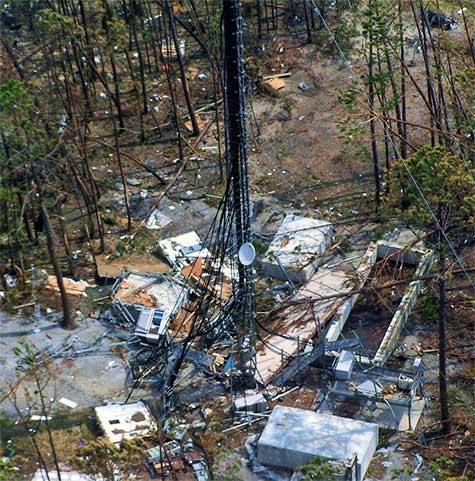 Since 2005, following Hurricane Katrina’s devastation of the Gulf Coast, Wireless Estimator has taken the industry lead in reporting communications structure damage caused by hurricanes, and will provide continuous updates. Restoration contractors and other businesses in the tri-state impact area are urged to email their storm damage photos to info@wirelessestimator.com.

The most recent Category 4 at landfall was Hurricane Harvey last year which hit Texas with winds of 130 mph. However, although it quickly lost its intensity, most of the damage from Harvey was caused by tremendous flooding across the Houston metro area where carriers were able to refuel most cell sites that were low on backup power.

Hurricanes that have smashed into the Carolinas include Hugo in 1989, Fran in 1996 and Isabel in 2003. Hugo was among the most intense, which made landfall in South Carolina as a Category 4 with 140-mph winds.

Cell phone towers weren’t ubiquitous in 1989 and there are no known reports of failed structures.

Hurricane Andrew was a Category 5 hurricane that decimated Florida in mid-August 1992, the most destructive hurricane to ever hit the state with sustained wind speeds as high as 165 mph.