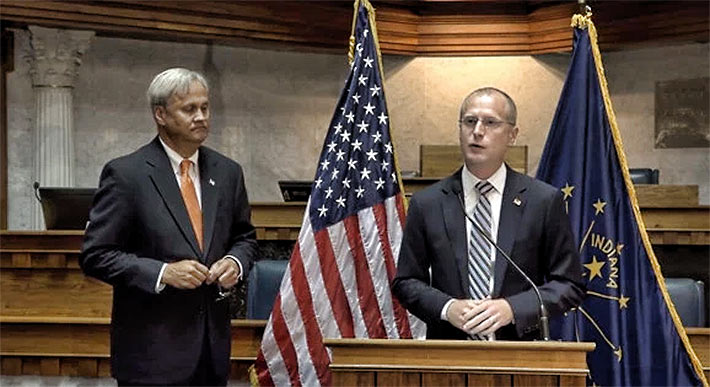 The FCC will vote in three weeks on a plan to accelerate next-generation 5G wireless networks around the U.S. by overriding some local rules that they believe will hold up deployment.

FCC Commissioner Brendar Carr announced at a press conference today in Indianapolis that the plan is targeting deployment of small cell transmitters that are oftentimes subject to local delay and high fees under current rules.

Following recent announcements from the nation’s top two cellular carriers, Carr noted that Indianapolis is the first city to have 2018 5G deployment commitments from both Verizon and AT&T.

“Indianapolis, not New York, not San Francisco, is number one in the country for the most intensive 5G investment … that’s because of this state’s innovative leadership,” said Carr.

He pointed out that 5G networks will look much different than those legacy wireless networks of the past.

“Upwards of 80% of new deployments will be small cells with antennas no larger than a small backpack.  These small cells can be attached to existing light poles or buildings and blend in to their surroundings.  Putting these new small cells up will require providers to invest about $275 billion in communities.  That represents a massive investment in America’s infrastructure and jobs, without a penny of new taxes,” Carr said.

The FCC’s plan is expected to win approval from the agency during its meeting in late September.

In his prepared remarks, Carr said the FCC’s plan has four main ideas.

“First, it reaffirms local control over wireless infrastructure decisions where it is most appropriate, while ensuring that commonsense guardrails apply to outlier conduct.  We do so by providing updated guidance on the types of local reviews that, in regulatory parlance, can materially inhibit or effectively prohibit small cell deployment.  But by taking a balanced approach, we show respect for the work of state legislatures, including Indiana’s.  We do not disturb nearly any of the provisions in the 20 state small cell bills that have been enacted.

“Third, we tailor the “shot clocks” that have long governed local review of infrastructure deployments to account for the size and scale of small cells.  Consistent with many state laws, we determine that local governments should conclude their approval processes within 60 days for small cells being added to existing structures and 90 days when a provider wants to put up a new small cell pole.  At the same time, we recognize corner cases where a flood of new applications could legitimately overload the local process.  So we put procedures in place to address this.  In adopting these reforms, we do not propose a “deemed granted” remedy, which many local governments opposed on the grounds that it would allow deployments without their authorization.

“Fourth, we preserve local governments’ reasonable aesthetic reviews.  This is an issue I have heard a lot about in my many meetings with local officials.  Communities have a particular look and feel to them.  Significant effort is put into maintaining a community’s aesthetics, particularly in special zones such as historic districts.  We affirm that federal law does not prevent local governments from continuing to apply aesthetic standards so long as they are reasonable, non-discriminatory, and made public in advance.”

He said that those four common sense ideas were drawn from the hard work of leaders “right here in Indiana’s General Assembly and in 19 other state legislatures.  By taking your ideas nationwide, we help ensure that every community in our country is 5G Ready.  And that will make a difference to American jobs and families.” 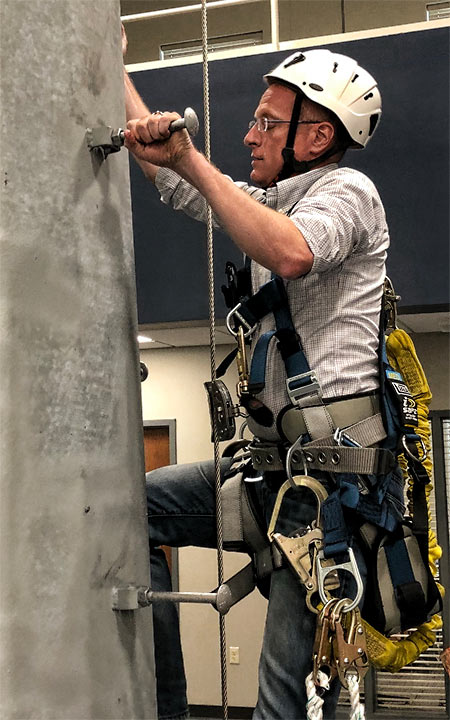 FCC Commissioner Brendan Carr practiced climbing on an indoor monopole and took those new skills outside where he climbed another structure in June in South Dakota.

“Over the last 5 months, NATE has played a prominent role providing FCC Chairman Ajit Pai, Commissioner Carr and their respective staff members with tangible opportunities to visit sites and experience first-hand the role that wireless infrastructure and siting policies play in the deployment of macro towers and small cells that are both so critical to 5G.

“The plan that Commissioner Carr unveiled today takes the successful tenets of small cell deployment legislation that have been passed by some of the states and standardizes them in a manner that will provide a road map moving forward that is necessary to ensure more Americans are in a position to take advantage of broadband and 5G networks in the future.”

“NATE encourages all of the FCC Commissioners to support this important order during their upcoming September meeting,” added Schlekeway.

According to a recent study, Schlekeway said, Carr’s plan will save $2 billion in unnecessary fees, stimulate $2.5 billion in additional small cell deployments and create more than 27,000 jobs.

WIA heralds the need for Carr’s 5G policies
The Wireless Infrastructure Association (WIA) issued the following statement from President and CEO Jonathan Adelstein regarding Commissioner Carr’s announcement on the FCC’s next steps on 5G deployment:

“I applaud Commissioner Carr’s announcement today in Indianapolis, Indiana, a state leading the way in 5G-forward policies, and an example for the FCC to consider for its next wireless deployment order. The steps the FCC is taking recognize the important role wireless infrastructure will play in enabling next generation wireless broadband. Wireless infrastructure will help the United States continue to be the global leader in wireless innovation, and I commend the entire FCC for its work.”

“In his announcement, Commissioner Carr rightly reaffirmed a balanced framework with localities over wireless infrastructure decisions where appropriate, while ensuring that common-sense guardrails apply to actions that inhibit broadband deployment. The partnerships between the wireless industry and local communities remains crucial to 5G deployment and Commissioner Carr’s announcement strikes a positive tone to build upon them.”

“I thank Commissioner Carr, Chairman Pai, and the other Commissioners for showing great leadership on 5G infrastructure deployment. We will continue to support the Commission in its efforts to make 5G a reality for every American.”