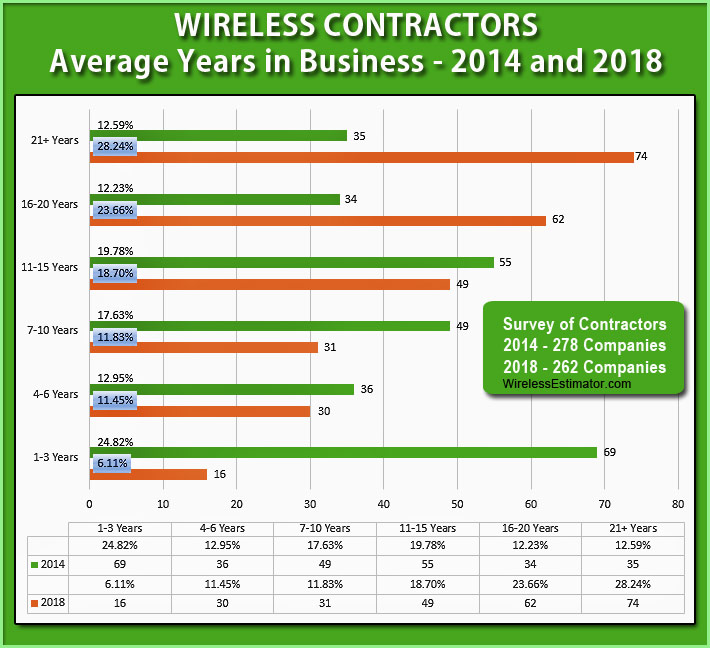 A Wireless Estimator survey recently completed by 263 wireless infrastructure contractors has provided a wealth of information regarding carrier payment terms and other industry concerns that will be detailed in additional reports next month.

However, the first evident troubling or possibly beneficial data unveiled is that new contractors are not entering the business as they did four years ago when Wireless Estimator also obtained through a vetted contractor survey the average number of years that 278 companies had been in business.

As detailed in the chart above, 25% of all contractors in 2014 had been in business from 1 to 3 years, but today that number has significantly declined to just 6%.

According to company owners and carriers, the primary reason for the decline is generally more stringent entry-level requirements and a maturing industry.

One mid-sized contractor who has been in business for 25-plus years said that it has become “harder and harder to enter the industry since profit margins aren’t there to support growth.”

He’s convinced that start-up costs are higher due to the complexity of the work and the need for things like expensive test equipment that didn’t exist years ago.

“When it comes right down to it, why would anyone enter the industry at such low-profit margins. The inverse question can also be asked, why are older legacy tower contractors leaving the industry? I think the answer is the same, it’s getting harder and harder to make a profit,” he informed Wireless Estimator.

He questioned why “margins have fallen at a time when, in theory anyway, the volume of work has risen. This flies in the face of simple macroeconomics. It probably points to the fact that there actually is not as much work as everyone is talking about.”

According to Patrick Shea, co-founder of  Zurich Tower Insurance Program, consisting of 140 industry contractors, there has been a “steady decline in payroll compared to previous years,” indicating a slowdown in wireless infrastructure work.

Carrier see upsides and downsides to the stats
One top-four carrier executive informed Wireless Estimator that he saw an upside to the data: “The contractors are more mature, which hopefully means they are gleaning the many benefits of experience, including safe work practices. This could also be interpreted to mean there was enough workload, profit, and positive momentum to sustain and grow these contractors for many years.”

The downside of the data, he said, is that there is not a lot of new entrants in the industry.

“New blood can bring innovation and lower prices, but I would much rather have the sustained safety and experience that comes from older companies, than new and expanded entrants to the industry. New entrants may offer lower prices to obtain business, but it’s not sustainable, and it leads to shortcuts in safety and quality. This shortsightedness has no place in our industry,” he said.

Another key carrier executive that monitors the industry to confirm that the workforce is available to ensure the success of their 5G rollout and other macro needs, said that he sees a “constriction” of available crews, but believes that “as in the past, companies will expand to meet industry needs.”

Famine is a killing field for new business 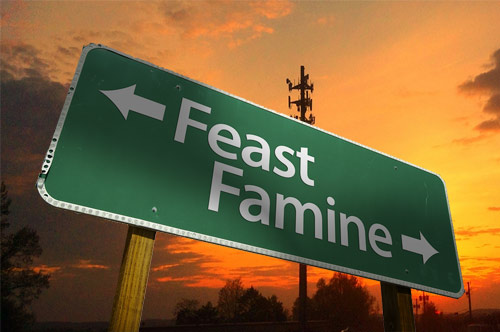 “Pricing pressure is evident on every level as a result of the turf model making slimmer margins the norm and we are continually walking away from work that typically larger firms will perform without hesitation,” said one contracting company executive.

“Then they ask us to do this work at an even deeper discount. This poison pill has killed many a startup that may have otherwise survived,” he said.

He noted that compliance, insurance and licensing are significantly higher when compared to earlier times.

“The carrier surge response atypically gives inflated levels of work with too short lead times and then is able to cancel purchase orders without regard for scheduled labor creating feast or famine. This is a classic big company reflection of quarterly ROI knee-jerk rather than a balanced CAPEX rollout and operational maintenance schedule. The feast is good for the startup, but the famine is a killing field for new businesses,” he said.

An industry analyst said the lower number of new entry contractors is “a head-n-shoulders pattern in 2014 that has normalized in 2018.”

He said, “this is a maturing of business from cowboy/extreme neophytes to a more normal linear trend indicating growing qualifications and stability.”

“The key is that there are growing barriers-to-entry for this work, from regulatory to business,” he said, citing the need for subcontractors to achieve a BROWZ  high certification score before they can be considered for any work.

“All in all, it seems positive and stabilizing.”

But one contractor believes it’s a negative.

“The business model of the turfing vendor has ballooned the larger firms’ workforce and starved the startups that were the breeding grounds for entrepreneurship. The solid firms continue to work directly for the carriers while the startups’ clean scraps from the table of the turf.”

“As our industry matures, it will become more difficult for new entities to compete. This is a good/bad thing. Yes, we will be safer and perhaps more polished. But the price of maturity will stifle the entry into the business by people who measure the diminishing returns with the increased cost or risk,” he said.

“Competition for employees makes it more difficult for a startup to attract and retain people who are essential to the stability of a new company,” he noted.

Being large doesn’t ensure profitability
However, being a larger contractor doesn’t guarantee success.

One well-known and respected business president with almost 100 office and field employees – today considered being a larger business since many companies are downsizing and utilizing subcontractors – informed Wireless Estimator last month that his 12-plus-years firm hasn’t been profitable in three years and he’s considering shutting his doors.

“Their model pricing makes it almost impossible to make a profit. Yes, if everything went smoothly you can make money. But it’s a rare day when that’s in your favor,” he said.

Profit killers: Under the radar independent contractors
“We all know that there is still a large group of men with ropes and a truck that perform second and third tier sub work mostly on a 1099 basis,” said one Southwest contractor. “We realize that in carrier-related work and in some cases the second-tier sub work on vertical real estate sites.” 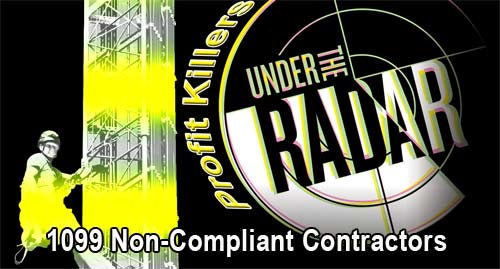 A Midwest contractor today said that there are still those small two or three-man companies that are crippling legitime companies.

“Companies will hire them knowing that they don’t have the pass-through requirements of the carrier,” he said.

“They’ll provide tools, test and other equipment that is beyond their ability to buy, which is illegal, but they do it.”

He acknowledged that the industry’s “pool of resources is dwindling,” and believes that some companies are going to be going under, but “free market forces” will then allow contractors to increase their prices.

Hopefully, he said, he will benefit from that if he can continue to “hang on”.

“Instead of spending time on business development,” he said he’s “spending too much time on cash-flow management because of carriers’ delayed payment terms.”

According to individuals who have reviewed the longevity statistics, the increase during the past four years of 21-plus-years companies to 28% from 13% is reflective of those companies in the 16-20-year-group of 12% increasing those ranks.

Wireless Estimator President Craig Lekutis will be further discussing these details at the NATE  WIN conference in Pensacola, Fla. on Oct. 29, 2018, during his presentation of Hiring and Maintaining Top Tower Talent.

Comments? Send them to info@wirelessestimator.com or post them on social media.