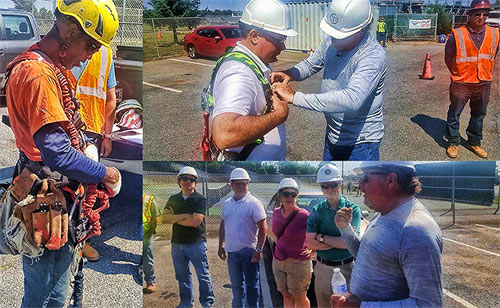 Teltronic Towers and NATE provided U.S. SBA and OSHA officials with the opportunity to witness the exacting skill sets and safety requirements necessary to provide wireless services during  a real-time antenna installation project.

During the visit, officials from U.S. SBA and OSHA witnessed in real-time a Teltronic Towers crew replacing cellular antennas with upgraded antennas and equipment at a monopole site.

The U.S. SBA and OSHA observers also learned first-hand about the tremendous impact the national consensus standard ANSI/ASSE A10.48 is having on the industry from a worker safety and quality perspective.

NATE was represented at the site by Board of Directors member John Paul Jones and Director of Legislative and Regulatory Affairs Jim Goldwater. The association said it appreciated Teltronic Towers Vice President Jeff Tinio and his team’s effort for collaborating with NATE to make this site visit experience happen.

The video is a companion series to the Association’s popular #ClimberConnection campaign and is a vital component of NATE’s workforce development outreach to promote the profession and attract new workers into the industry.

The video, entitled “10 Years in the Industry” includes testimonial footage of a company safety director emphasizing the importance of training and discussing how much he has enjoyed his career working in such a dynamic profession.