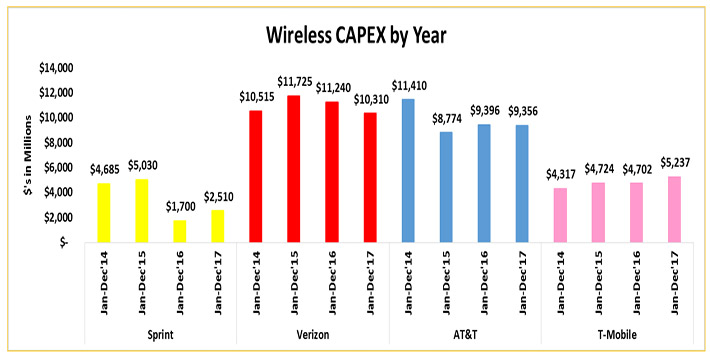 Sprint said its capex would be lower this year and it is not sustainable.

Earlier this month the FCC, which is reviewing the planned merger of T-Mobile and Sprint Corp, said it had paused its 180-day review clock to give the agency time to analyze a large, complex submission on benefits that the proposed merger would create.

On Wednesday, Sprint took a different path to grease approval by the agency – providing a presentation that implied that they were having serious survival concerns.

The carrier said that it needs to make significant investments in its network, “but even with our business transformation and improved cost structure, our debt burden and lack of scale and profitability diminish our ability to simultaneously increase investment in our network and offer promotional pricing.”

Sprint said it must focus on investing in its LTE and networks; however, they said this “requires cutting back on promotions and on pricing especially when they do not create profitable growth.”

“In the meantime, given the weak perception of the Sprint network and perceived value proposition, growth cannot be achieved while simultaneously charging higher prices,” the carrier said in its presentation.

Sprint said it continues to suffer a decline in subscribers, and promotional moves, such as low introductory rate plans and free lines yielded short-lived improvements in net adds but did not provide sustained growth.