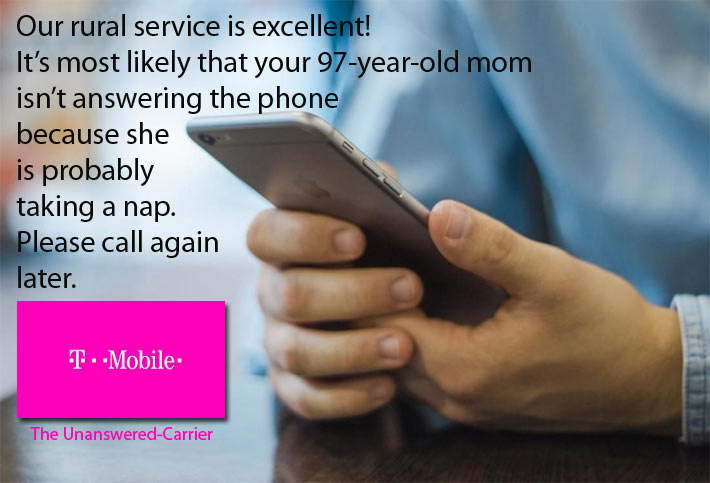 T-Mobile has agreed to cough up $40 million to the FCC after the agency accused the company of trying to cover up poor rural cell service with false rings.

The settlement also requires the carrier to implement a “compliance plan” to address the issues.

It was alleged that T-Mobile was using false ringtones to make it seem like someone just isn’t answering their phone when in fact the call was unable to go through because of poor service.

“They cause rural businesses to lose revenue, impede medical professionals from reaching patients in rural areas, cut families off from their relatives, and create the potential for dangerous delays in public safety communications,” the settlement said.

As if it was just a software glitch, in a statement T-Mobile said, “Our actions have always been focused on better serving our customers and the ringtone oversight, which was corrected in January 2017, was unintentional.”

The FCC was investigating T-Mobile for violating rules it introduced in 2013 to improve phone coverage for rural areas.

The FCC said that it found that in 2007 T-Mobile began using servers that included a “Local Ring Back Tone” (LRBT) for calls from certain customers that took more than a certain amount of time to complete.

T-Mobile  further reported that in 2013, as it migrated to different servers, it began using the LRBT only for the out-of-network calls from its customers that were routed via Session Initiation Protocol (SIP) trunks and that took more than a certain amount of time to complete, and that it continued its practice of using the LRBT on such calls (and expanded the LRBT to cover such calls on additional SIP routes) after the FCC rule prohibiting the practice went into effect in January 2014.

The FCC said because T-Mobile applied this practice to out-of-network calls from its customers on SIP routes that took more than a certain amount of time on a nationwide basis and without regard to time of day, the LRBT was likely injected into hundreds of millions of calls each year.