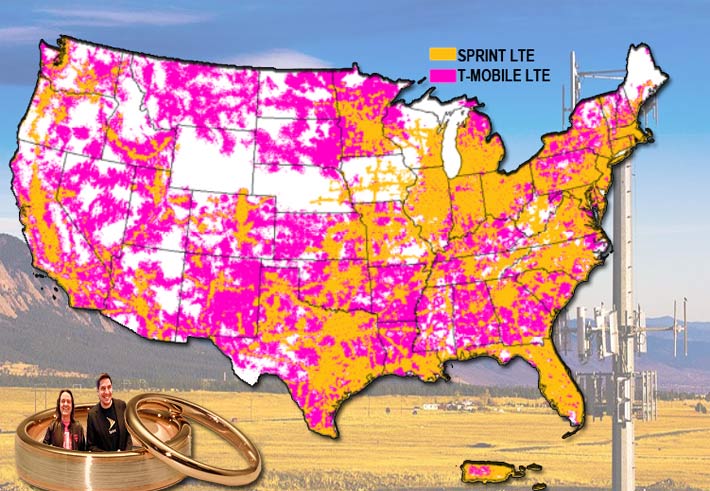 T-Mobile and Sprint said if their marriage is approved, they’re going to be giving a wedding gift to America of $40 billion to bring the country into the 5G era.

T-Mobile has taken the next step in their merger with Sprint by filing their Public Interest Statement with the FCC emphasizing to regulators that the public will benefit from the merger.

In making the announcement, CEO John Legere echoed the ever-popular need to be first with 5G, stating, “If we don’t take decisive, positive action, we risk ceding global leadership in both 5G and the entire next wave of technology to a country other than America. We cannot relinquish our leadership here and the New T-Mobile will deliver on these capabilities within the first couple of years of bringing these two companies together.  As a country we cannot afford to miss this opportunity and the new T-Mobile is fully prepared to do our part, and to do it fast!”

“This deal is needed to create a robust and disruptive competitor – because for all the success we’ve had as the Un-carrier, Verizon and AT&T are still massively dominant. Even after our merger, Verizon and AT&T each have market capitalizations that are more than double T-Mobile and Sprint combined and they control about two-thirds of the market share along with 70% of wireless revenues.”

”This merger is about creating a company that can truly compete for the long term with the massive incumbents, who are getting bigger every day.  And, the merger is needed for us to compete against new entrants like Comcast, Charter, DISH and others – as wireless, broadband and video converge,” Legere said.

In its 678-page filing, T-Mobile said that the combined company is committing $40 billion to bring it into the 5G era over the first three years, with the majority of the investment focused on the rapid enchance of their network.