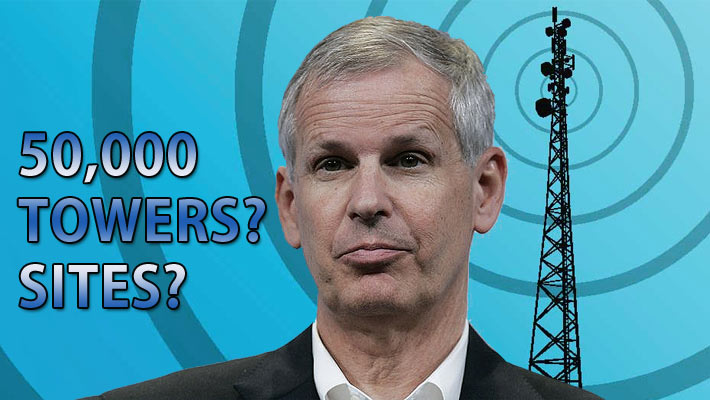 Although media headlines state that Dish Network is considering building 50,000 towers throughout the nation at a cost of $10 billion to launch a new 5G network, it’s doubtful that they will, but collocations are a strong possibility for towercos.

FierceWireless broke the story that Dish Chairman Charlie Ergen said at an investor’s conference that the company could spend up to $10 billion to build 50,000 towers in its efforts to jump into the 5G arena.

FierceWireless quoted Deutsche Bank Research analysts that “Ergen ‘was steadfast in expressing his enthusiasm toward building a ‘real’ 5G network’, and ‘reiterated that the cost to build the nationwide 5G network would be about $10bn.’ Perhaps most importantly, a 5G build (and executing the vision) appears to be the clear Plan A for DISH, and a spectrum sale appears like more of a Plan B. Commentary indicates that beyond the initial IOT-centric build, the 5G network plan relies heavily on macro towers, utilizing an estimated 50,000 sites (for context, Sprint is just shy of 50k sites, TMUS/VZ are in the 60k range each, and T is closer to 70k).”

The analysts further stated, “While we do not take a view on the likelihood of a build vs. sale (and do not have this factored into our Tower forecasts), we believe the prevailing narrative from DISH in upcoming months will be more centered around an organic 5G buildout, relative to a potential sale.”

If Dish anticipated building their own towers for their network, the analysts wouldn’t have viewed it as a positive for tower companies such as Crown Castle, SBA Communications and American Tower Corp., which they did.

In addition, Dish faces a 2020 deadline to deploy some of its licenses it acquired in recent years, and Ergen earlier this year outlined a two-step deployment for all spectrum holdings, beginning with the $1 billion construction of a nationwide Internet of Things network.

Ergen informed the Wireless Infrastructure Association conference in May that DISH had already ordered radios for the IoT network and anticipates testing in Q4.

He didn’t mention that he was going to construct towers for his network.