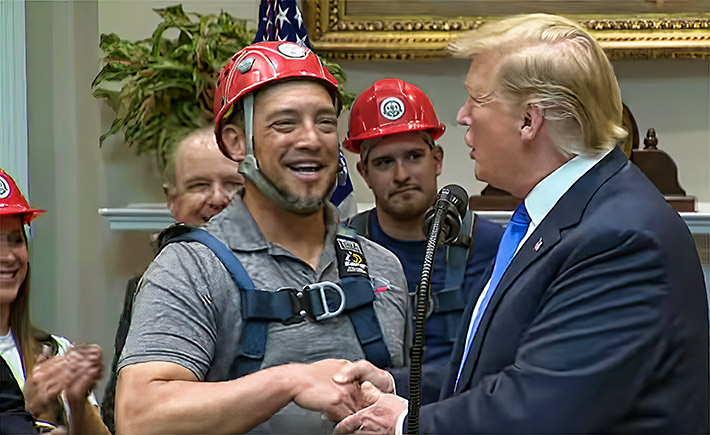 When President Trump asked Kenneth Massengale on Friday how high does he climb, the Teltronic Towers tech replied, to 1,000 feet. “I don’t want that job,” said the President jokingly. But approximately 30,000 climbers do, perhaps not at that height, and were recognized nationally in the White House for the exacting and challenging work they do to build and maintain America’s telecommunications networks. (Video below)

President Trump’s 5G press conference from the Roosevelt room (video below) in the White House on Friday spotlighted the nation’s tower climbers as they surrounded him with support  during his and FCC Commissioner Ajit Pai’s presentation.

It was a proud industry moment as President Trump complimented infrastructure builders, as many millions of viewers witnessed those accolades. The event and the National Association of Tower Erectors’ representation was covered by Wireless Estimator on Friday. 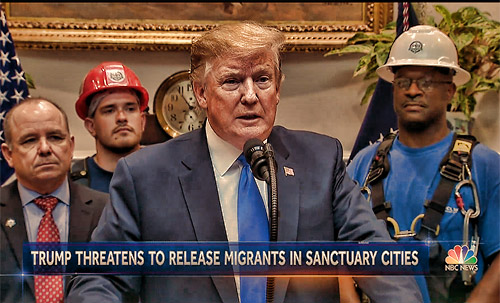 Although 18-plus-million viewers saw the important role that tower techs have in building out 5G, many additional millions saw workers in back of President Trump during the past three days as he fielded a question from a reporter about sanctuary cities.

All major national network and cable stations covered the briefing regarding 5G, either in prime time news, or cable networks breaking in during the afternoon White House presentation, providing an estimated 18-plus- million viewers, based upon average network viewership.

However, following the 5G presentation, President Trump responded to reporters’ questions, none of them enquiring about 5G, but the nation’s border crisis. The President’s incendiary comments about possibly placing some immigrants in sanctuary cities touched off a firestorm of media coverage, all of them replaying non-stop video throughout the weekend of his Friday comments with tower techs and NATE’s Chairman Jimmy Miller standing behind him listening to the questions and comments.

On Saturday, FCC Chairman Ajit Pai made media rounds discussing the need for 5G and most outlets began their interviews with President Trump discussing network needs, with the same White House pool coverage video with Miller and tower technicians behind him.

President Trump and Miller, according to a White House transcript, offered the following comments:

JIMMY MILLER:  Mr. President, Chairman Pai, on behalf of the National Association of Tower Erectors, our 900-member companies, we build, deploy, and maintain the wireless infrastructure of this nation.  And you all are fixing to put us to work, and we appreciate it.  (Laughter and applause.)

THE PRESIDENT:  And your people do an incredible job, Jimmy.  Thank you very much.  What a great job.

And they go up high.  How high do you go?

THE PRESIDENT:  Yeah.  And somebody said 200 feet and sometimes more.  That’s a long way up.

How high do you go?

THE PRESIDENT:  I don’t want that job.  (Laughter.)

Following the presentation, the FCC outlined two major announcements to ensure U.S. leadership in the next generation of wireless connectivity, or 5G, and continue the Commission’s efforts to close the digital divide in the following statement.

“The United States aims to win the race to 5G, the next generation of wireless connectivity. 5G networks promise faster speeds, lower lag times, and more capacity, all of which will enable new wireless broadband services and transform industries from agriculture to transportation. Under Chairman Pai, the FCC is actively pursuing a comprehensive strategy to Facilitate America’s Superiority in 5G Technology (the 5G FAST Plan). The FCC has moved swiftly to execute the Plan’s three key components: pushing more spectrum—the airwaves that enable communications—into the marketplace,promoting 5G wireless infrastructure, and modernizing outdated regulations.”

“The FCC’s efforts are producing results. Cisco recently projected that in three years, the share of 5G wireless connections in North America would be twice the projected rate for Asia. And according to CTIA, the U.S. leads the world with the most commercial 5G deployments of any nation. To build on the success achieved thus far, Chairman Pai announced on April 12 that the FCC intends to start its third 5G spectrum auction on December 10, 2019. Since November 2018, the FCC has auctioned 1,550 megahertz of spectrum to be used by commercial wireless providers for 5G connectivity. The third 5G spectrum auction will be the largest in American history; the FCC will be selling 3,400 megahertz in three different spectrum bands at one time.”

Chairman Pai also announced his intent to create the Rural Digital Opportunity Fund, which will inject $20.4 billion into high-speed broadband networks in rural America over the next decade. It will provide funding through a reverse auction to service providers that will deploy infrastructure that will provide up to gigabit-speed broadband in the parts of the country most in need of connectivity. The Rural Digital Opportunity Fund represents the FCC’s single biggest step yet to close the digital divide and will connect up to four million rural homes and small businesses to high-speed broadband networks. These networks will bring economic opportunity to rural America and help support future 5G technologies.

“I applaud President Trump’s strong commitment to maintaining U.S. leadership in 5G. Today’s announcements will keep the U.S. on track to lead the world in 5G deployment and reap the benefits of next generation wireless networks, unleashing a wave of economic growth and innovation,” said Wireless Infrastructure President and CEO Jonathan Adelstein on Friday.

“Specifically, the auction of 3,400 MHz of millimeter-wave spectrum is a huge step to making enough spectrum available to meet the data and bandwidth demands of 5G services. Under Chairman Pai’s leadership, the FCC has shown incredible foresight in preparing for 5G, by already auctioning nearly 5 GHz of spectrum for 5G use and by reducing several unnecessary barriers to 5G infrastructure deployment. The Administration is also taking important steps in workforce development to help train a 5G workforce with the right skills.  The President and Chairman Pai recognize that all three fronts – spectrum, pro-investment siting policy, and workforce development – are essential to U.S. leadership in 5G.”

President Trump quelled rumors during Friday’s presentation that the federal government might privatize 5G networks, and Adelstein lauded those comments.

“WIA also welcomes President Trump and Chairman Pai’s support for a private sector, market-driven approach to 5G buildout. Over the past three decades and the previous four iterations of wireless generations, this approach has proven the most effective way to drive investment in wireless networks, and 5G is no exception,” said Adelstein.