Commentary — Recurring headlines purporting that 5G is untested and RF radiation from cell towers could cause cancer is the ammunition being used to close down or prevent the addition of cell sites on school campuses or on adjacent properties throughout the nation.

To cool down the heated campaigns, towercos and carriers simply refer opponents to the FCC’s Wireless Devices and Health Concerns page that primarily discusses cell phone RF and hasn’t been updated for years. 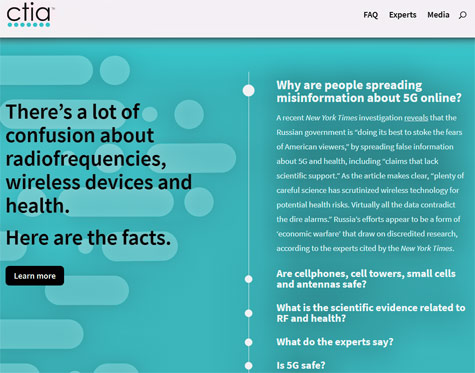 USTelecom and the Competitive Carriers Association provide nothing on their sites and the Wireless Infrastructure Association has a Radio Frequency Information page that discusses RF infrastructure with industry vernacular that will not assuage NIMBY activists.

CTIA should be at the forefront of championing research and educational outreach to allay unfounded cell tower and cell site RF cancer concerns that are almost daily news items, especially since the trade group is well-funded to meet the challenge with $71 million in revenue during 2017 and organizational assets to draw upon of $166 million.

But it doesn’t appear to be a core concern for the association.

In 2010 they introduced a web site, Cell Phone Health Facts, but as the name implies, it was phone-centric and it never focused upon base stations.

After their members observed a groundswell of anti-siting support across America after Sprint sadly caved in to activists’ demands in April to remove a cell site in Ripon, Calif., CTIA became energized to address tower siting and three weeks ago, purchased a new URL and did a soft unveiling of their new site, Wireless Health Facts.

It has FAQs that address 5G and a sentence or two about towers and base stations. There are also article links with one of the most instructive being a video that details why scientists say we do not need to worry that 5G RF will cause cancer.

Unfortunately, it’s 15 minutes long and will likely not be of interest to those who expect to get a full kernel of knowledge from an average 33-character Tweet.

Another article link is to a recent New York Times investigation revealing that the Russian government is “doing its best to stoke the fears of American viewers,” by spreading false information about 5G and health. It’s an interesting read but you have to have a subscription to view it.

CTIA could also consider creating their own videos, such as those produced by the National Association of Tower Erectors that have been highly successful in promoting tower climber and RF safety.

And CTIA can provide easy to understand RF graphics. Or create an advisory committee of leading industry experts.

The trade group could also take a look at creating a Facebook page for their new site and take a more active role in promoting their important message on social media.

Gussied up website information and article links coupled with an SEO-friendly URL promoted by Kevin Costner marketing will not reach and dispel the fear that many people have regarding 5G health risks.

Hopefully, CTIA has the foresight to provide additional reasoned educational solutions so that folks can reevaluate the misinformation they’ve been exposed to and appreciate the benefits that broadband will safely provide such as FCC Commissioner Brendan Carr’s proposed $100 million telehealth initiative announced earlier this month.

HAVE AN OPINION? Of course you do. And if you would like to share it with our editor, please send it to info@wirelessestimator.com.